Shap Boyd, the defensive coordinator at Muskingum College, calls it "the best coverage in football."  "It’s the mother of all coverages," says Pat Narduzzi, the defensive coordinator at Michigan State University.  At first we were taken back by these bold assertions - considering they were coming from two of the premier defensive minds in the country. But, after conducting all of the research that you will find in the following pages, you may in fact come to the same conclusion.  We’ve sifted through our surveys, compiled our research and concluded our data and the truth is we’ve found some of the same sentiments echoed by many other coaches we spoke with.

The truth is, Quarters coverage, or Cover Four, is a scheme that, even though its roots date back to the early 1980’s, is just as much en vogue now as it was when former Dallas Cowboys coach Jimmy Johnson was using the scheme over 20 years ago.  But like many coverages, Quarters has its strengths and weaknesses.  Before we go any further with our research, we would be remiss not to at least inform you of both the positives and negatives of using this coverage.  We’ll start with the good.

Before we delve into the specifics on technique, some interesting numbers we’ve found from our surveys:

"You better have two safeties that can tackle," is an often-quoted axiom when implementing Quarters coverage.  The reason is simple; Quarters coverage allows the entrance of nine defenders into the box on any given down (Diagram 1).  So, it’s only assumed that you’ll need to have two consummate tacklers on the back-end to make plays.  We asked that specific questions to all of the coaches that participated in our Quarters coverage survey and their responses might surprise you.  Of all that responded, 69.5 percent of coaches said that they don’t have to be the best tacklers on the field, and they have to cover just as well as they tackle.  Only 17 percent of coaches felt they have to be the best tacklers on the field.   What we’ve found is that most programs have one sure tackler at the Safety position - particularly the Strong Safety- and 69.4 percent of coaches will play with a strong and weak safety in Quarters looks. 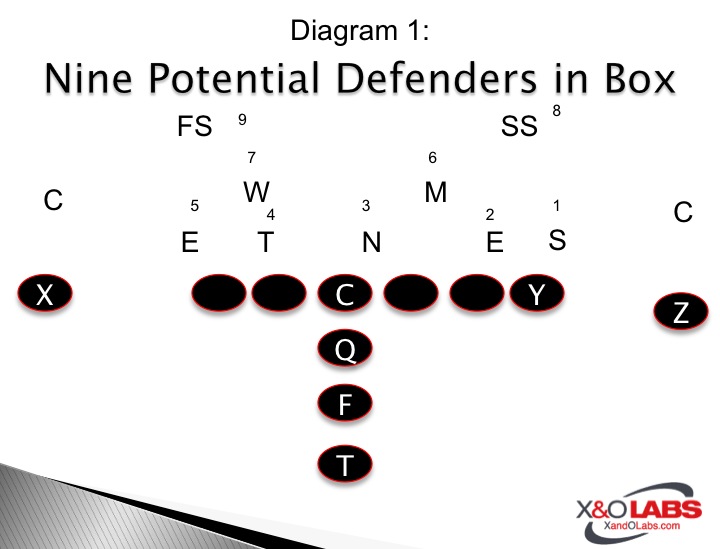 Nick Rapone, the secondary coach with the Arizona Cardinals, is one of those coaches that believe his safeties must be better athletes than tacklers.  For many of the open style offenses he used to see weekly while he was a defensive coordinator in the Colonial Athletic Conference, Old Dominion who won the conference used three formations exclusively, 2x2, 3x1 and 3x2 sets, it’s important that those safeties are cover players first and tacklers second.  "The way we do it, those safeties need to play man to man coverage," said Rapone.  "Our safeties are not eight man front safeties, because once number two splits out they are in a man-to-man coverage philosophy.  We look for them to play man because we don’t play a lot of two-deep coverage."

Rapone spends five minutes of working one-on-ones during the season every day because that’s what his kids do every day.

Shap Boyd is another believer in not having aggressive, run fitters to play this coverage.  "I’ll find guys and coach my guys to play it effectively enough," says Boyd.  "They have to be tacklers, but I can teach them to be effective."  In Boyd’s system at Muskingum, his Safeties fits are going to be off-bounces to the perimeter.   "I’ll never ask my Safeties to fit in the A or B gap," he says.  "The ball gets spilled outside to them.  You ask them to make plays in space in the open field.  It’s not an ass-kicking thing in the box."

Getting Nine in the Box

It’s important to note that the alignments of Safeties in Quarters Coverage will depend on how many receivers are to their side of the formation.   Remember that Quarters coverage is a "mirrored" coverage, where one side of the secondary is working independently of the other side.  Because the offense can present various looks to each side of the formation, we will detail the changes in alignment in Case 2 and Case 3 of our report.  Here, we’ll start with fundamentals and techniques of those Safeties and how you can get them more involved in the run game.

When we conducted our surveys, we found that 63.4 percent of coaches teach their Safeties to read the EMLOS (End Man on the Line of Scrimmage) for a pre-snap read, regardless of the formation.  According to these coaches, the EMLOS will dictate whether is a run or pass concept by using firing off the ball with a low hat (run) or extending off the ball with a high hat (pass).  Adam Waugh, the secondary coach at the University of Louisiana-Monroe, gives his Safeties the allusion of "a pane of glass" that will indicate whether it’s a run or pass scheme.   "He looks through the "imaginary" pane of glass that rests along the offensive line," says Waugh.  "If that offensive tackle breaks the pane of glass, the safety plays run.  If that offensive tackle only "bumps" the plane of grass, then he plays pass.  The ‘don’t go if you don’t know’ philosophy tells the player to play pass if there is any indecision."  Waugh did mention that he would change the reads with his Safeties sometimes on a weekly basis depending on whom they were playing.  "When I was at Army and we used to play some monstrous offensive linemen at Boston College, we would pick the 6’7" tackle who can’t bend and say that he was our read," said Waugh.  "But with these quicker, more athletic spread teams it became difficult to decipher."