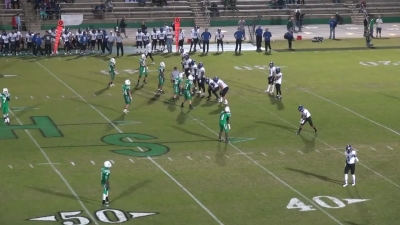 “If he’s good at pass drops, he’s probably not a good Linebacker.” I heard an older coach state this a few weeks back at a clinic and it made me think quite a bit about linebacker pass drops and how much time I spend on it.
Upon reflection, I decided that I am not asking too much out of my linebackers to be able to defend the run and still be able to get to the correct spot on a pass. I expect our defense to be good against both the run and the pass, so shouldn’t I expect my players to be good at defending both?

We are a 4-3 defense as a base, however, I believe the way I coach LB drops will carry over to any scheme of defense. We play multiple fronts (3-3 Nickel, and 3-4 Dime) and multiple coverages and we speak the same verbiage to our LBs regardless.

First off, it is important to note that we do not have our linebackers read the QB. I believe with modern offensive coordinators want linebackers to read the QB’s eyes. This allows the QB to manipulate the defender with his eyes while his receivers get to where the defender has vacated and “sits down” in that area. I teach our players that they must train their eyes and read routes, not read the QB.

When I was an offensive coordinator, I loved it when LBs would “spot drop.” I’d tell my QB “he’s wrong either way”, because we could make him pay regardless of where he was dropping. For that reason, we do not speak in ambiguous terms of zones (ie. hook, curl, flat). Instead, we coach our kids’ eyes and read offensive receivers and routes at the LB position. I want my kids to cause a disruption on those receivers’ routes, I want to take away the receiver’s ability to “sit down” between two of my defenders.

In the following examples, I will be talking about our drops and reads out of our cover 5, which is essentially a quarters coverage. As I mentioned before, the concepts can be applied to any system.

In our cover 5, the secondary depends on a formation to determine how we’re going to play to each side. For you Zone Drop guys, our OLB’s are the guys you would consider your Curl/Flat guys. This guy will read the uncovered linemen on his side or the OT.

Note: For more depth on how me make those reads, be sure to check Coach Ginn’s other article on LB Reads/Run Fits.

As soon as the linebacker gets a pass key he will flip his hips and get his eyes to the #2 receiver. He is taught to get his belly button towards the #2 receiver to get his initial drop read. The #2 receiver will be doing one of three things if it’s a pass; Out, Vertical, or In. Here is how we teach him to respond to each of these triggers: