It is truly an honor to once again write an article for X and O Labs and to represent St. Charles Catholic and our entire staff. As I was thinking about topics I kept coming back to using Quarters coverage and its adjustments to defend today’s offenses. Diversity in offensive systems dictates defenses to have a lead coverage system that can address variability for you throughout the year. I know we have all heard that Quarters coverage is too multiple and has too many adjustments. Most detractors say Quarters creates complexity and indecision therefore effectively meaning you really have “no answers at all.” Don’t believe that kind of thinking. It has been my experience in 28 years of coaching that kids can learn anything that YOU can teach. As with any article that I write this one comes with the same disclaimer. I am not trying to sell you on anything. I am only sharing with you my thoughts and the thoughts of our staff in implementing this very effective coverage scheme.

One of the questions that defensive coordinators have been trying to answer is “how do I get enough people in the box without giving up a ton of stuff in the passing game?” The next big question is how I take the run/pass conflict off enough people so that we can effectively defend the RPO games of today without just hoping that the Quarterback just misreads it or misses the guy. It is my contention that the closeness of the Safeties alignment to the interior of the formation, the adjustments that the coverage inherently has, and the natural disguise and multiplicity of the split safety look makes it the best option to answer these questions.

When we start teaching Quarters coverage the first adjustment, we teach our players is “Mix.” We like “Mix” as a basic adjustment to our Quarters coverage concept. Also, like it to two normally spaced twin receivers. We really like it more to the boundary because it guarantees us the spacing from the #1 and #2 receivers can’t get too wide. 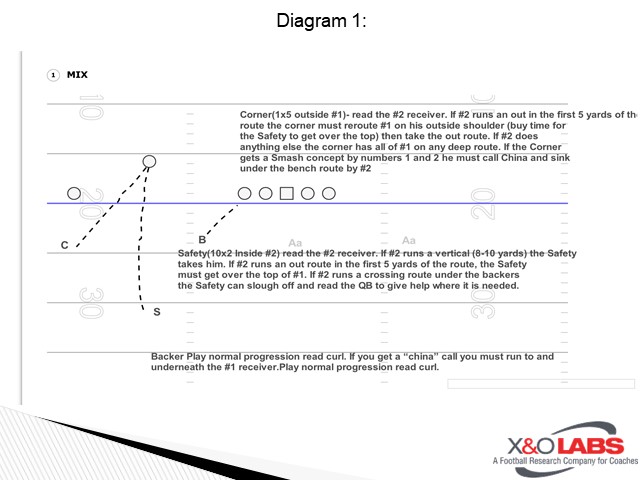