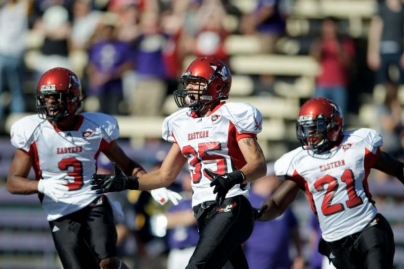 Editor’s Note:  Coach Valeria is entering his third year as cornerbacks coach at Eastern Washington University.  In all, he has 9 years of college coaching experience with seven of those years coming at the Division I - FCS level and two at DII level.  During that time, he has mentored six All-Conference Cornerbacks and two All-Americans.  He has also served as Assistant Recruiting Coordinator and as Director of Football Operations during his career.  Both starting corners won All Big Sky Conference honors both years he has been at EWU.

Eastern Washington University prides itself on being a defensive football team, often finding itself in the thick of the FCS playoffs each season.  The Eagles are primarily a Quarters coverage team that mixes in Cover 2 and Zone Pressuresout of a 4-3 Front.   Eastern Washington’s Cornerbacks coach Cherokee Valeria sat down with XandOLabs.com Mike Kuchar to talk about the two ways in which he teaches his Corners to play Cover Two- a “Kathy” technique and a “Squat” technique.   According to Valeria, he uses those techniques based on what type of Cover Two you’re going to be playing.   “If we play true five underneath and two over the top we will play a Soft Technique which we call Kathy,” said Valeria.  “If we’re going to be playing four underneath with a middle hole run through defender(similar to Tampa 2?), we will play a hard technique which we call Squat.”

Strengths and Weaknesses of the Techniques

Before we address the specific techniques behind both coverages, Valeria teaches his players to key the QB for four specific reads post-snap:

The Corners responses are predicated on these three reactions.  All of these reads have corresponding techniques that will be address in this report. We will begin with Kathy Technique.

Philosophy of Base Cover 2