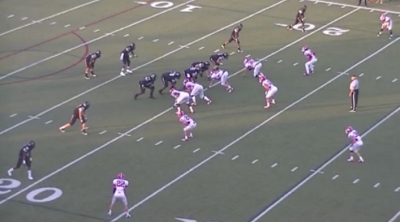 The game has changed, and as a result, defensive coordinators at every level have been forced to reexamine the way they structure their defenses. Spread offenses have changed the landscape of college football. While many of the RPO schemes that offenses are starting to use seem cutting edge, the reality is that offensive coaches are going back to time-tested schemes and simply adapting how they apply them. Good offenses know there are four surefire ways to put stress on a defense:

Perhaps no formation puts these four stressors on the field at the same time as well as Empty formations. These formations allow the premier playmaker on an offense to create mismatches that put him in space to make plays. Empty also maximizes the threat of vertical routes, and in doing so, can force box defenders out of their natural habitat. Though Empty formations do not explicitly create extra gaps around the tackle box, they can open up gaps if a defense responds by removing a typical box player, thus effectively creating the same issue for a defense.

We run a 4-3 defense as our base with a nickel package that is rooted in a 3-4 structure as a change-up. Our defense is a one-gap scheme that relies heavily on our technique and on our recognition of formations, tendencies, and schemes while blitzing infrequently. We worked hard to make sure that we could find a solution to Empty that didn’t force us to stray too far from our the core concepts of our defense. What we found was that it is much more difficult to do than it is to say.

During the 2014 season, 11 of the 13 teams that we faced ran some form of Empty formation. Our staff has been looking for the best “answer” for empty formation for four seasons. During that time, I have met with a handful of well-respected, college-level defensive coordinators and surveyed many other coaches to find the best solution. In the end, he most common answer that I received was some version of “I don’t have one.”

One former ACC & BIG 10 defensive coordinator told us that his graduate assistants had completed an in-depth summer study on Empty for two consecutive off-seasons. As part of their research, they broke down every snap of Empty that they could get their hands on. They looked at both sides of the ball and tried to analyze both the offensive tendencies and the defensive schemes used to combat them. In the end, the research suggested that Empty is a different creature and must be handled as such. With that research as our guide, we have adopted a similar philosophy at Milton.

This may seem drastic, but the absence of a back and the possibility of 3x2 and 4x1 alignments really is a game changer. Take a Trips formation for example, a 3X1 set is a 3X1 set and most defensive structures allow for easy adjustments regardless of offensive alignment. Many teams will incorporate the same front, coverage, and pressure packages to a 3X1 set with an attached TE just as they would if that TE flexes out. In my opinion, Empty does not allow itself to be so cleanly adjusted to.

Since it is different, we start with a different set of questions. Here is a list of questions that we address when we are preparing for an Empty package we start by addressing the following questions:

Once we are armed with the answer to these questions, we are ready to create a solution for our defense that can work against the Empty formations that we are going to see that week. In the following section of this report, I will address some ways of defending multiple Empty concepts and schemes.

The most traditional 10P Empty formation typically aligns receivers in a 3X2 distribution.