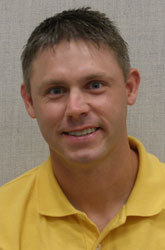 "The drill described here assumes that our safeties have made a run call based on the offensive formation before it. For the most part, because our safeties are the run-first players in this call, much of the drill focuses on their reads and reactions." Jared Pospisil, DC, Union High School (IA)

We use a version of Cover 4 as our base coverage because it helps us get as many players defending the run as possible. Out of a base 43 defense, Cover 4 allows our safeties to be very active in run support while ensuring that we have at least two pass-first, deep pass defenders. Therefore, because the run fit for the safeties is so important to our defense, we incorporate the Cover 4 Run Read Drill as the cornerstone of our defensive practice. We have set up our in-season weekly practice schedule to include one day devoted entirely to defense and two days that split offense-defense evenly. We incorporate the Cover 4 Run Read Drill into the defense-only day so that we can devote as much time to the drill as possible.

In our version of Cover 4, before each play begins, each side of our secondary makes one of two calls based on the offensive formation that comes out before it. Certain formations allow the safety to stay tighter to the tackle box, allowing him to be a key player in the run. Other formations pull him out wider and deeper to allow him to play the pass more effectively.

The drill described here assumes that our safeties have made a run call based on the offensive formation before it. For the most part, because our safeties are the run-first players in this call, much of the drill focuses on their reads and reactions. The corners, who assume the pass-first responsibility during a run call, basically go through their alignment, stance, and start when the ball is snapped, and finish each repetition with their late fill technique. When we play teams that crack heavily, however, we incorporate the crack-and-replace concept into the run read drill.

Although we set up the Cover 4 Run Read Drill to mimic the unique offensive look and blocking scheme we will see each week, the standard set up for our drill consists of the following: 4 or 5 trash cans that represent 5 offensive linemen, 2 players representing end men on the line of scrimmage (EMLOS), 2 or 3 players representing offensive backs, 2 safeties, 2 corners, and 2 coaches (one acting as the QB and one giving blocking/running assignments) (diagram 1). 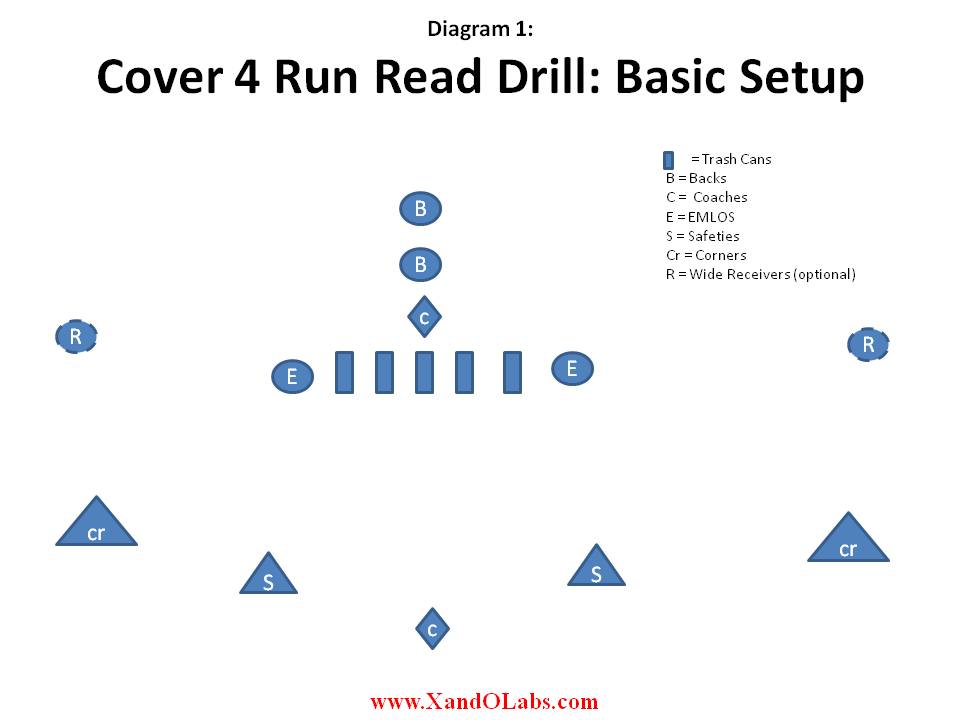 We start each drill with three things in mind that we hope the athletes carry over into games: alignment, stance, and key. Generally, when our safeties make a run call to their sides, they align at 8-10 yards deep, on the outside shade of the EMLOS; in most cases, this is a tight end or an offensive tackle, depending on the offensive set we see that week. For the stance, we ask our safeties to use a square stance, with knees and hips flexed, back slightly flat, hands loose in front of the body. During a run call, we want our safeties to keep their eyes out of the backfield. As a result, we tell them to key the EMOLS solely. We find that, in most cases in high school offenses, the tight end or open side offensive tackle tip off the type of play. At the snap of the ball, we tell our safeties take a couple pop steps in place as they key the EMLOS; this gets their feet moving without losing ground.