There is no doubt that today’s offenses have made the jobs of defensive coaches much more difficult. We all have to find answers to combat no huddle, empty, trips, formations into the boundary and RPO’s. Defensive coordinators from all levels of football are trying to be more multiple in defending the multitude of things they will see but still maintain simple rules for their guys to follow.

At George Fox University, Defensive Coordinator John Bates is utilizing his base 3-3 personnel split field coverage defenses to run a three down, cover two robber hybrid to battle all the empty and trips spread schemes he sees in his conference.

The benefits of utilizing Robber coverage concepts against spread offenses are the following:

Traditional odd stack schemes consist of a 6-man box with 5 defensive back types aligning based on coverage. Typically there are two flat defenders and a one high safety along with two cornerbacks. Employing this defense as a split field outfit makes it difficult because the two flat defenders never play at depth and have limited deep coverage responsibility. George Fox University will be in a two-high shell almost all of the time. But in order to do that, Coach Bates will rotate the three types of safeties between being the flat players and the deep half, third or quarter player. The nature of his structure is a 3-3 defense, by personnel and alignments. He has taken the traditional one high base coverage that accompanies an odd stack and has found a way to utilize split field coverage defense. He does this by running a 30 front cover 2- robber hybrid, to battle all of the empty and trips formations that they see in his conference.

So in Coach Bates’ defensive cover two hybrid, he places those two flat defenders deeper. The diagram below is GFU’s base defense vs. 2x2 formations. 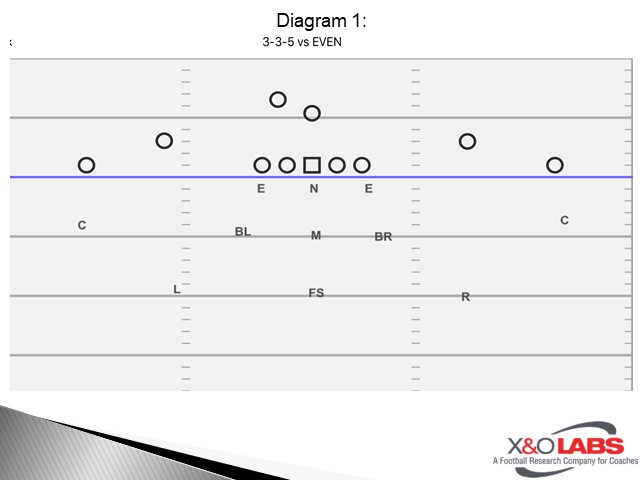 George Fox University will be in a two-high shell almost all of the time.  To do that they will rotate one of the deep three safeties between being the flat or curl player and the deep half, third or quarter player. Either the right (Ram) or left (Lion) safeties will be the down safety, responsible for the flat, depending on where they are in regards to field or boundary. If the ball is on the left hash the Ram is the down safety to the right, the free safety is the deep half to the right and the Lion is the deep half to the left (boundary).  This is very similar to how 4-2-5 teams rotate their three safeties but Coach Bates chooses to play right and left as opposed to field and boundary.  Coach Bates and many other coaches around the country are hesitant to run Cover 2 schemes because of the fact that the Mike backer has to play the middle of the field and match the number three receiver vertically. With so many offenses running variants of empty and trips formations, having the Mike backer on number three would cause a certain mismatch in the offense's favor. Most high school linebackers and many college players don’t have the speed to be a middle hole player and also play run.

So Coach Bates has countered this problem of having his Mike backer be the middle hole player in Cover 2, by running their Money front. So now instead of the Mike backer being the middle hole player, it is the Free Safety. Coach Bates runs this Money front against teams that will be in 10 or empty personnel who want to throw the ball more than they run it. It's Coach Bates philosophy is to force teams to do things that they don't want to do, and this case it is to force teams to run the ball.