The hardest part to teaching Cover 2 is training the eyes of the corner. A lot of DBs will align correctly and look inside on the snap of the football and when that ball is snapped. We are physical with the receiver to their side, but a lot of the important key details seem to fall out of place after that. Corners think that cover 2 is just a defense where they have to be more physical and not let anyone outside of them, but they’re not grasping how much more goes into the coverage itself.

We keep the concept of our coverage as basic as we can for our 2 corners. The drills we use do have a lot of different parts that we try to put together. This is done to help the corners understand  how dominant Cover 2 can be if they can understand the importance of leverage, play quick and aggressive with their hands, and most importantly, play just as fast with their eyes.

We try to break down the defense into 4 phases. Each phase gives the DB an opportunity to see how important training your eyes can become to a well trained Cover 2 corner. Depending on the number of receivers and down and distance, that will determine how we play the technique of cover 2.

We like to align our DB with his inside leg just inside the outside leg of the #1 receiver, especially if they come out in any 21 personnel with 1 receiver to each side. We play more of a press technique by being really handsy and punishing. This is to disrupt the quick passing game.

If the offense tries to spread us out in a 2x2 set or 3x1, we will loosen up to about 5 yards with our alignment on the receiver being the same. The DB’s eyes always remain inside. If they have a #2 receiver to the side they are playing, that receiver will be the first key and he will keep his eyes to see through that receiver to the QB. Note that we are not reading the end man on the line of scrimmage in this drill because this is built to help with the passing game aspect of Cover 2. That way our DBs can keep their hands on, eyes wired, and feet hot, so that they can be ready and alert if they anything comes at them. We really try to focus on the importance of the QB and how he will tell us where and when the ball is coming our way.

Phase 1: This phase is the first step in the progression. We like to run in the spring and the early parts of fall camp to give our guys an idea of how important reading the QB is. A lot of the time, they get so caught up in focusing on the receiver in front of them that they cannot keep the control they need to be both aggressive and relaxed enough to break on any pass plays that comes to their side. Phase 1 combats that by concentrating on the simple, short game concepts such as Hitches, Slants, Quick Outs, Q-screens and of course, the fade route.

We will use a coach as the QB in the beginning stages along with a cone and a normal 1 receiver to each side alignment. We have each DB focus on their eye placement of the QB the entire time, and nothing else. There is not a receiver in front of them, so they shouldn’t take their eyes back.  We teach the DBs to read the front shoulder level of the QB, so that they know in which direction he wants to throw the football. For example, if the front shoulder is up, flat and relaxed to determine the depth of the pass. They also pay attention to the attitude of the QB in order to see when he wants to throw it. This is from the non-throwing hand coming off the ball to deal it. We also teach the DB to read the drop and placement of the non-throwing hand as well in this drill.

This may seem complicated, but we walk through everything before the drill so that they can get a visual understanding of what we are talking about. Reading the drop is the tough part as the DBs want to be aggressive and that tends to stop their feet. We say that “when our feet and eyes die, we die.” When the QB is under center, we show the DB the difference of the drop. A quick pass from the QB under center will be a quick 3 step drop, this tells our corners that something quick is coming at them so they better keep their feet hot and be ready to break and drive at any second. If the QB is in shotgun, then the type of pass and play is easy to read because the QB will just catch the snap and then be ready to deal immediately. The first step of the DB on the snap of the ball will be with his foot closet to the outside. This takes away any extra leverage the receiver may have to be able to get outside. Next, the DB will begin to buz his feet; this allows the DB to keep his feet moving so he doesn’t allow himself to be dead in the water.

The DB will keep his eyes on the QB and then break and drive depending on the position of the QB’s front shoulder. The level of the shoulder, if it’s up in the sky, relaxed and level. Then, finally, they will read the attitude of the QB to see when he wants to get rid of the ball. When the off-hand begins to come off the football, they begin to break and drive on the direction in which the shoulder is pointed. The DB will break on the QB, and then catch the ball and finish through a cone 10 yards behind the drill. This helps the DB understand the QB can tell them all about a pass play without even knowing where the receiver is. Coaches can use the routes that they want to run or mix and implement them any way they want. 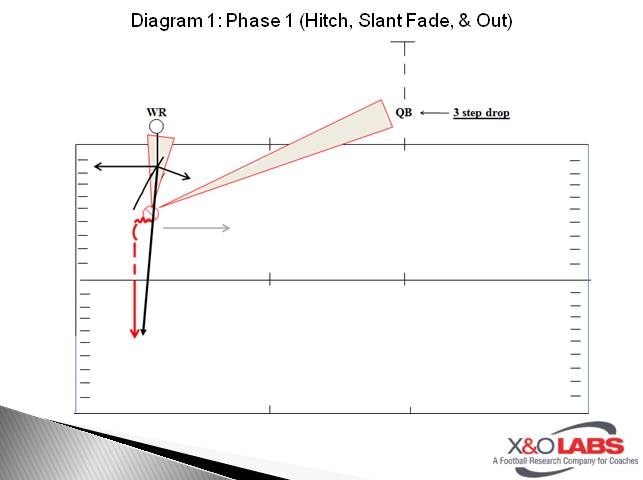