LB Rules and Fits in a 3-High Safety Defense

Iowa State took the coaching world by storm this past year with their 3-high safety, 4-man box version of the 3-3-5 defense. One of the first questions that are often asked is "how do you stop the run with only 4 in the box?" After running a very watered-down version of this defense in our two biggest games of the 2018 season, our head coach decided to fully invest in this defense. As a result, we went to Iowa State to learn from the source.

One of the most important aspects of this style of defense is putting your personnel in the best possible positions. Your personnel needs to be strong right down the middle of the defense. Your defensive lineman who demands a double team on every play is your nose guard, any pass rush ability is a bonus for this position. Your best linebacker at reading/ most disciplined needs to play the middle stack backer because his job is to force the ball outside to others if he does not make the play himself. Your best football player needs to play the middle safety, he will be asked to trigger on run plays, play underneath zones on the pass, play deep thirds to deep halves on other pass plays, and play man-to-man coverage on slot receivers. Your second-best middle safety type player should play your outside backer to passing strength/the field. On any given play he will need to spill fullbacks and offensive lineman, play up on Tight Ends and set and edge, fight off blocks from slot receivers and be able to play man-to-man coverage on slot receivers within the same series. As far as secondary goes, your personnel can be predicated on what coverages you plan on calling during the game/season. We base out of a modified Cover 2 system, so our corners are slightly more athletic linebackers due to having primary run responsibility. Our safeties are usually very athletic ball-hawking type players who do not have primary run fit responsibilities. One of the key points in writing this article is that we are a 3-man front, 4-man box, 3-high safety team, not a team that runs this defense as a package. 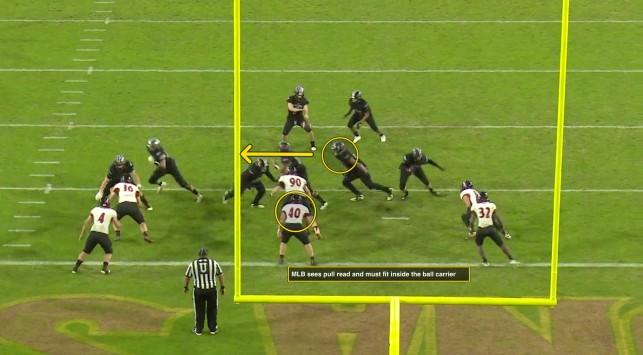 One of the benefits of our system is that the techniques that we teach as our base do not change regardless of alignment. It does not matter if you are aligned in a 5 tech, 3 tech, 4i, 2i, or a Shade, the technique and keys will not change for our defensive line. For our linebackers, their techniques are a simple as understanding if you are a box linebacker or outside the box linebacker. For our secondary, the coverage will dictate who is our force player and who is our 'hang player." For simplicity, we will say that our corner is our force player and his read is the end man on the line of scrimmage. The "hang player" is responsible for anything that happens late of the snap, he will not trigger on the run until the ball crosses the LOS.  The wild card to all of this is our middle safety who can be used to fit wherever necessary which can clean up and wrong fits by the front.

Before addressing the specific reads of the linebackers in this scheme, it's important to detail other players responsibilities as it all fits in.

Attack your shade, read the adjacent OL toward the ball 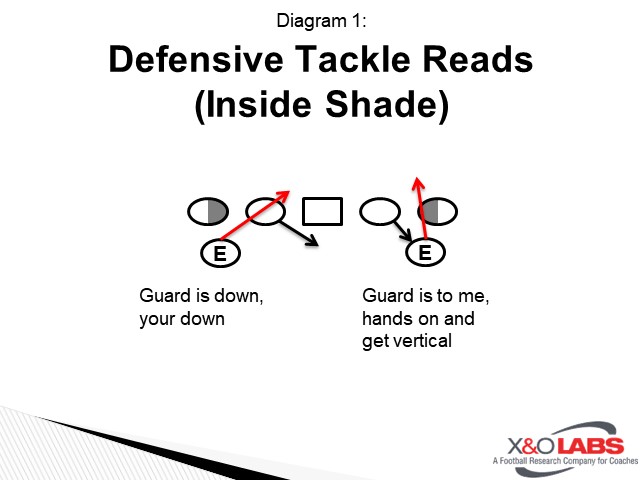 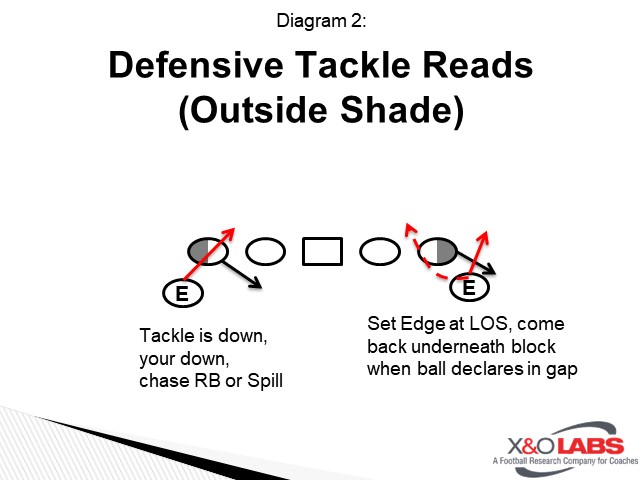 The nose is the defensive lineman that plays a shade technique the least. If he is head up on the center, he will bridge explode into the center, trying to get a good knockback. After he will read the block coming at him. If the center stays square and gets help from a guard, he will attack the crease between the two defenders while having control of the center with his hands. If he gets zone where the center is trying to work away from him, he will play fast and keep the center and the backside guard working towards him, playing on the front side of the zone and allowing the middle linebacker to play fall back.

As a Linebacker, inside or outside the box, you will see 3 types of run blocks: zone, down, and pull. On any base play, our linebackers will have one of three jobs, edge setter/spiller, inside fitter, or Counter/Boot/Reverse (CBR) player. The linebacker with run action towards him will be the edge setter/spiller, the middle backer will be our inside fitter, and the backer with the run action away will be our CBR player. (NOTE: there are times when we allow our backer away from flow to be fast flow towards the play but that is dependent on secondary call or gameplan)