The entire premise of playing man match coverages like Robber is to physically contest routes. Coach Giancola calls it "route ownership," and it's the driver of what the Eagles do from a split field perspective. All coverages are routed in the Robber family and are separated into two main principles: match defenders and coverage defenders.

These concepts are communicated universally by teaching three base coverage concepts, which can be universally applied to all back-end defenders. Not only does the technique translate, but as detailed later in the report, the pressure catalog is even more streamlined. Split field robber coverage eliminates the necessity for third-level safeties to insert into the location of the pressure. As Coach Giancola tells us, you can defend 2x2 and 3x1 open sets without rolling safeties. "Offenses would continually pick on backside X,” he said. “This gives you the opportunity to play 2 over 1 and keep the language and the scheme of the coverage the same. We want to be aggressive in coverage. How often are quarterbacks going to fit the ball into really tight windows consistently?”

Like most base Robber outfits, Bridgewater operates from 4-2-5 spacing. Its system is modeled directly after those established down the road in Blacksburg and include the following personnel:

The entire coverage system is built around these three main concepts: 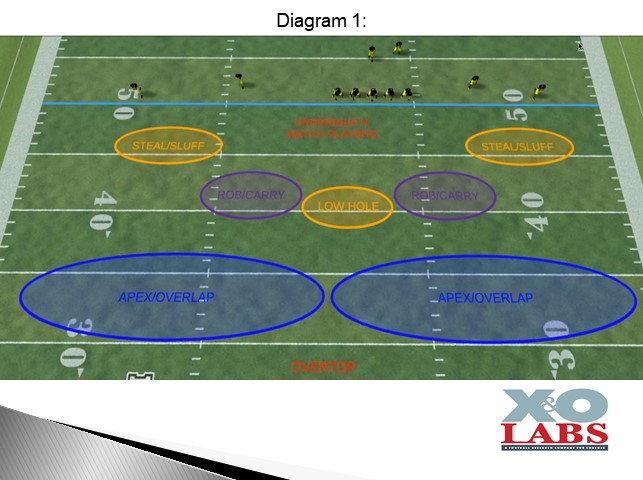 Each of these coverages is defined, developed, and consists of a non-negotiable to drive home the learning process. The first word in each of these concepts (steal, rob, apex) is a player's primary responsibility in the coverage while the second word in each of these concepts is their secondary responsibility when routes develop.  Essentially you are either owning routes or helping on routes. While the coverages may change, these principles do not. Because of this consistency, players can cross-train through position groups. Once the coverage concepts are taught, Coach Giancola and his defensive staff cycle through various drill work to make sure all coverage defenders understand these techniques.

Definition: These would traditionally be known as “flat” defenders. Steal/sluff defenders are underneath match defenders who are taught to “steal” any immediate routes to the flat and “sluff” (or sink) which means to trail underneath if no one threatens the flat. They are also force defenders in the run game.

Coverage Responsibility: Steal/Sluff defenders are taught to steal inside of the number one receiver. They will run with any wheel routes.

He will read the quarterback mesh to a quick game and steal through the three-step. If number one is vertical, they are taught to "sluff" off by trailing underneath number one as routes continue vertically. Against any 3x1 sets, the steal/sluff defender steals outside the number one receiver, not number two.

The Non-Negotiable: Steal/sluff defenders cannot let number one across their face, especially against two vertical routes.

Definition: These would be traditionally known as hook/curl defenders. They are pure trail defenders who are man defenders. If these defenders are overhangs, they may be tied to a run fit, which may be an interior gap if the 3-technique is not to their side.

Technique: If number two runs vertically he has to trail underneath him as far as he goes to force the quarterback to put air under the ball. If number two eliminates (is in), he will look to rob the next closes receiver in the direction of his key went out or in. If number two sits down, he is responsible for stealing him on the inside shoulder.

Non-Negotiable: Rob/Carry defenders have to run vs. number two vertical and play two across their face if he drives inside.

Definition: These are the deep half defenders. They are secondary run support defenders and will only drive up on run if receivers get hands on the underneath match players.

Technique: These defenders must be able to read the quarterback’s eyes post-snap.  They are taught to midpoint number one and two by weaving to stay in between those receivers. They will work to lean on verticals by reading the post-snap demeanor of the QB.

Non-Negotiable: Apex/Overlap defenders cannot get across the face of number one vertical. That’s easier to throw than to number two. The Rob carry defender can trail number two.

In Robber coverage concepts, the low hole defenders are taught to be a match defender and relate to number three. He owns any crossers or drags immediately but will work to a ceiling of 10-15 yards deep if there is no immediate crossing route.