The following research was conducted is part of X&O Labs’ special report on the 4-2-5 defense, which can be accessed in its entirety by clicking here. 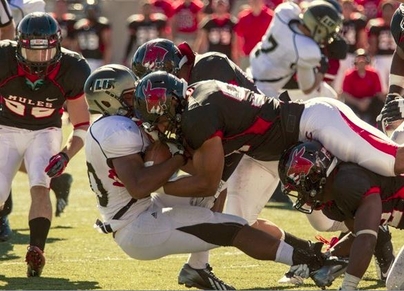 Like most defensive structures, there are a myriad amount of coverages that a coordinator can play behind it, but we’ve found that to be successful coaches must subscribe to the "less in more" theory - get good at a doing a few things right (or playing only a few coverages). Typically speaking, those that consistently use the 4-2-5 structure implement the following coverages on a weekly basis. Because these coverages independently can be the subject of its own special report, we’ve decided just to give a brief overview and description of each before going into more depth later in the report.

This formation was given the most attention when we started conducting our research, and with good reason. This formation is one of the most frequently used in football, particularly with spread teams that utilize four wide receiver sets. We’ve found that without question, this is the most problematic offensive structures for a 4-2-5 defense to defend simply because the offensive set is balanced, but the defensive structure is not. Simply put, a double slot offense has two viable "speed receivers," which means it’s difficult to get that 3 over 2 matchup that is possible against 11 personnel tight end formation. So when X&O Labs posed the question of how most 4-2-5 coaches defend this set, many were concerned about two specific details:

We’ve found that with the ball in the middle of the field, this problem only intensifies. With the ball on the hash, it seems like Robber could be the answer because that back side corner doesn’t have a long way to go to play the cheat halves technique, and the field comeback throw is a long distance to go. However, with the ball in the middle of the field, it’s "game on" for the offense. They can attack in equal space to either side of the formation. The question was whether coaches will play a split field coverage principle to double slot formations or will they use some sort of balanced two-deep structure like Cover 2 or Cover 4. Remarkably, most coaches were split on this topic, some preferred to stay in their Robber coverage, while some opted for more safer coverages. It seems to truly depend on how talented that number two receiver is away from the strength of the formation.

Some systems will run Robber scheme to 2x2 but rely on communication from the Strong Safety and Weak Safety because in effect, they control their halves of the field, the Strong safety will handle the read side, which will mainly be the field side (or most dominant receiver side) if in the middle of the field. The away side will be to the boundary.

Read Side (Robber Side):

The read side of coverage is simply Robber coverage but the difference is that the corner plays any number two receiver to the flat, not the strong safety in most robber schemes (Diagram 19). Our research found 45 percent of coaches will teach their corner to play any out route by number two, while 38.3 percent teach the strong safety to control it. It’s a detail that must be communicated by the strong safety, and as one can imagine, must be rehearsed frequently in order to be perfected.

For example, if the number two receiver runs an out route, the strong safety’s eyes go from number two to the number one receiver. He is playing curl to post on the number one receiver (Diagram 20). Some systems tell their cover players to read hips. So if the hips sink, that means the receiver is breaking his pattern off and is going to stop. If that happens, the safety jumps the pattern. If the hips don’t sink, the safety knows that there is a post route coming. He picks a junction point to intercept the post route and takes it.