Trips sets are football’s simplest unbalanced concepts and require some sort of compensation from the defense to match the numbers advantage created by the offense to the trips side. While there are many types of 3x1 sets and therefore many different ways to play them, I am going to highlight today our base “Midpoints” check that we use to defend formations that involve a detached #3 receiver in a traditional 10 personnel spread set.

Midpoints is something we learned from Pat Narduzzi’s staff in his time at Michigan State, and it plays off of the mathematical trend that the least targeted receiver in 3x1 is the farthest #1 to the trips side (7% of all 3x1 targets against us in 2019). As the name implies, Midpoints is going to align our corner to the trips side 7 yards deep and halfway between the #1 and the #2 receiver, or on their “mid-point.” Midpoints dares the average high school QB to make the farthest throw, while leveraging our defenders to the much more accessible interior receivers, who are also matched by an underneath player.

It is also worth noting for us that in 2019, nearly 80% of our defensive snaps took place from a hash, further increasing the distance from the QB to the #1, and thus decreasing the chance that he will be targeted. When we look at the math, we can see why. On a high school hash with a straight QB drop of 7 yards, the distance of a throw to the opposite sideline of 10, 15, and 20 yards downfield is roughly 39, 41, and 45 yards, respectively, that the ball must travel through the air.

We feel that the biggest strengths of this check at our level of high school ball, compared to other ways to play against 3x1, are two-fold. The first is the ability to protect the deep shots, limiting the big play capability of an offense by leveraging the spacing of our 4 defensive backs with their 4 primary receivers, while also gaining re-routes on the interior receivers. Secondly, Midpoints keeps us truly split-field and allows us to keep our boundary safety to the short-side to assist our corner with the receiver - who oftentimes is the offense’s most explosive player. We have multiple ways of involving our boundary safety to combat the offense’s tendencies, which I will briefly touch on later, but using Midpoints to stay split field gives us maximum flexibility.

The early version of how we taught this had the safety follow a similar horizontal alignment rule mid-pointing the #2 and #3, but we have since moved him on top of #3 after we had some difficulty with the #3 on bender routes in the middle of the field.

Our overhang/Nickel, who is fully out of any primary run fit versus a detached #3, will align on the inside eye of #2 at 5 yards and follow his standard C4 rule of walling #2 from entering the middle of the field. The Mike is the #3 wall player and will align in a 50 on the outside hip of the OT.

I should also note that we prefer to set the strength away from a detached #3 to reduce the conflict of the Mike (RPO) by giving him the B gap, and also protecting the boundary Will with the presence of a 3-technique weak. You can see our alignments below.

In his deep ¼ of the field, the corner’s responsibility is to lean on the vertical of #2 and be ready to fade back on #1 in the event of #2 pushing off his vertical stem. We had initially kept him on a square pedal technique, but have since resorted to more of a side-shuffle/kick technique to allow him to push off of his back foot and drive on any underneath throw, see the seam route and cap the vertical of #2, or fade back into the sideline on #1 without having to flip his hips. He is also allowed to show press on #1 initially but must bail pre-snap in order to ensure he can overlap #2.

If this sounds familiar to Cover 3 technique, it certainly is. One of the things we love about coaching Midpoints is the easy transition of teaching our corners their Cover 3 technique in some of our zone pressures. We do not coach him any differently, which allows us to use the much-coveted “same as” style of teaching that we strive to use as much as possible.

Here we see how the corner would overlap and top a vertical release from #2 after getting a re-route from our Nickel. 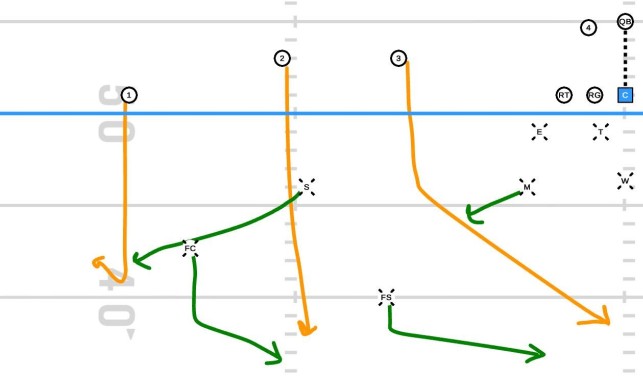 The field safety’s primary responsibility in Midpoints is to play the vertical of #3. At 10 yards off the ball, we still want him to pedal out of the snap with eyes on #3. If #3 deviates off his vertical path before underneath the Mike, he will shift his eyes to #2 and get over the top (compress with the corner).

Here we see the distribution vs. a common sprint-out, flood concept.

The technique of the FS is the “same as” he would play 2-Read, one of our other common ways to play 2x2, except now it is to #3 and #2 (important to note that we are NOT playing 2-Read, the Nickel is doing something different, but the teaching of the safety is exactly the same). The FS must be the topper of the coverage and will add on late to any screen game (more below), needing to sit on top of the pump-n-go.

Our Nickel has perhaps the most important role in Midpoints, as his eye control and technique are going to have a direct impact on almost anything the offense tries to attack us with. The initial key of our Nickel is the #3 receiver, as he will be responsible to push out with him on any out-breaking route or bubble.

Defending screen game is one of the main concepts that must be worked against in Midpoints and is a way that offenses will often look to attack with the deeper safety off the ball. We are looking for the Nickel in this case to “crack the crack” and work over the top to compress the ball back to the Mike and FS. The tighter the Nickel plays to the LOS, the more difficult this technique is, so we need to ensure that his heels are 5 yards off the slot to give him the vision and pursuit angles he needs to be successful. 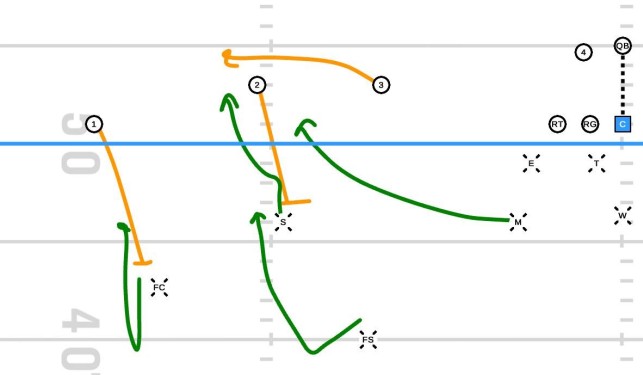