Bracketing the X in Trips Formations

At the 6A level in Oklahoma, it seems almost everyone has a big time FBS recruit playing the X. Due to this, it was imperative for us to find ways to combat our opponents who would get in 3x1 formations and isolate the X. At the same time, it was important not to live in the same coverage to the trips. For that reason, we found multiple ways to play trips. This kept the offense guessing by what coverage we were playing while keeping us sound to the X’s side.

The “walk” call within our 3-4 has allowed us to play a variety of ¼ based coverages such as palms or a quarters to #1 and #2 receivers, and “solo” to the #3 receiver (Diagram 1). This makes it an easy change up to trips, but also giving us the ability to play 2 on 1 on the single receiver side (X). Although we might have taken away the X, it was still important that the offense didn’t get too comfortable seeing the same coverage to trips. For that reason,  we employ a mixture of palms, cover 4, cover 8, and off man to that side. 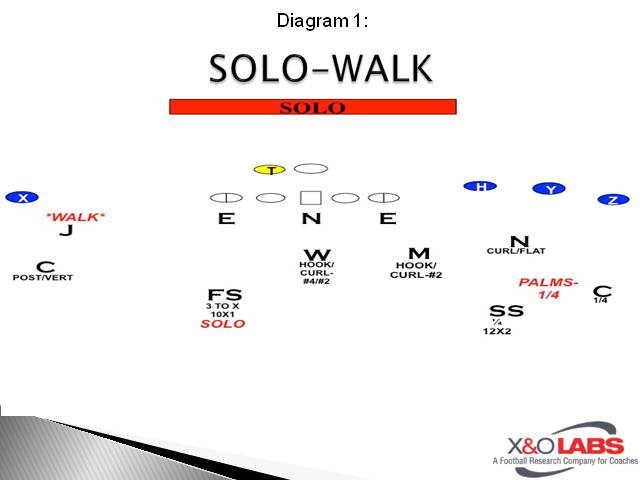 What also made our “walk” call effective was the ability to play various palms coverages on #2 and #3 receivers. One of which being our “Thief” coverage (Diagram 2). In this diagram, we are playing a palms coverage on #2 & #3 with the SS and FS, while still maintaining a true six man box with “20” Linebackers. This worked well because we were not teaching a new concept to anyone except the SS, who becomes like the “Palms CB.” Because of our flow fit concept of the inside linebackers, we were gaining a “flow gap” player in the WLB. That said, we found gap scheme concepts to the weak side could cause us issues at times because our force player was slow on same side power/dart weak. Now it was our turn to find answers for having a fast force player, but still keeping the ideology of our defense and “Defending the X.” 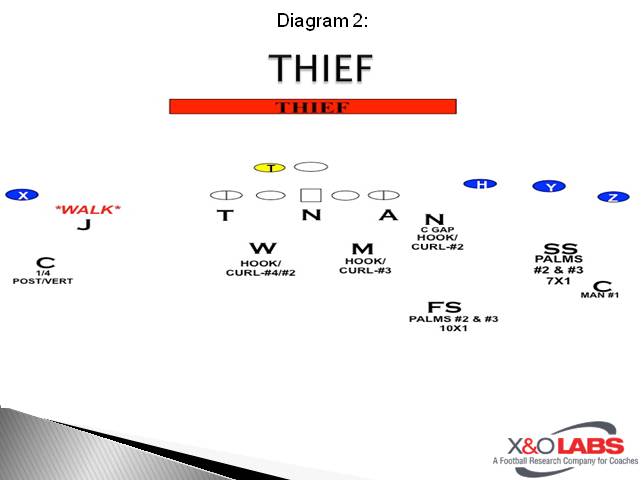 To go back to our walk call, it was so easy to install due to we didn’t have to teach anything new out of our base structure to trips. It also fit how we were playing flow fit run fits with the inside linebackers. While the OLB was the C Gap-Force player, we were still able to pick up an extra C gap run player in the WLB. On our walk call, we taught the OLB like a “Cover 5” CB. He would have an inside technique on the X with his hands on and wall to the sideline. At the same time, he had to be very aware of where the RB was. If the RB was away from him, he had to trigger fast and was not allowed to get his hands on the X.

While the pre-snap disguise was there, it was not always effective due to “run action” by the QB/RB mesh. For this reason, sometimes we found that we were defeating the purpose of the “walk” call.  This forced us to find another a variation of keeping the “2 on 1” thought process on the X.

To study game cutups of the “Walk” coverage concept, click on the videos below:

Editor’s Note: Coach Gower has provided segmented clip narration for each cutup below:

In the clip below, here is our walk concept. This was the first game of the season in a new defense, so we were still working out some kinks. Notice how the OLB gets hands on and is physical with the X. Because the RB is set to him, he knows he can more physical on the X. Would like to see him wall to the sideline, but will take the physicalness. Also as we discussed earlier, notice the flow gap fit by the WLB that allows him to flow into the C gap.