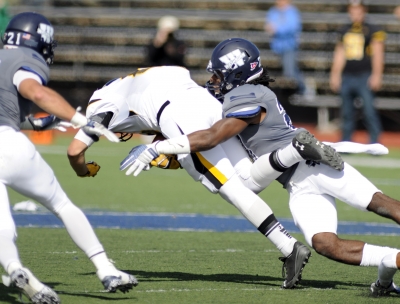 Our base scheme here at Washburn University is the 4-2-5. We believe that by playing this as our base defense we’re provided with the flexibility to defend any type of offensive scheme we will face. Up-tempo no huddle, spread, pro-style, triple option, etc. are all schemes to be soundly defended by the 4-2-5. By having 5 DBs on the field, we are able to play a variety of coverages with our base personnel. Last spring, we wanted to research and install a coverage that combined several parts of our preferred coverages. “Auto” coverage was our perfect fit as it allows us to play a Cover 3 coverage while handling certain routes with man principles. In addition, we have found Auto coverage to work very well against any combination of 4 verticals. We can eliminate this spacing problem normally felt against 4 verticals by squeezing the verticals into our help. Auto is by no means our own original idea, but we have modified certain aspects of the check system to fit our personnel (as explained below). 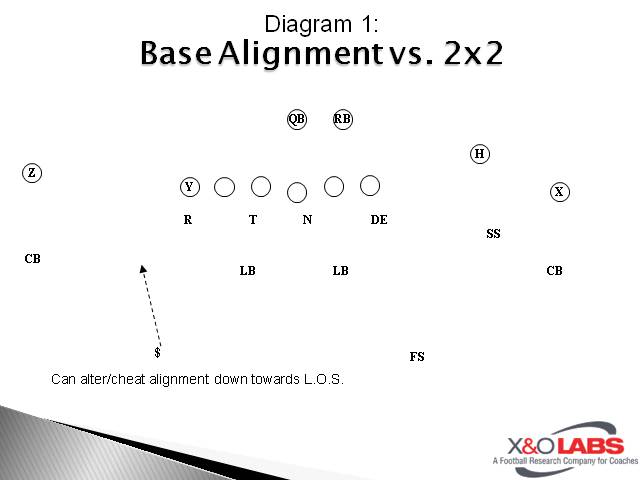 In our base alignment above, Auto is drawn against a base 2x2 set which is our favorite formation to play this against. With that said, we believe this is a sound coverage against any formation. In this case, the alignment rules are as follows:

Assignments vs. Any Non 3x1 Set

The concept of our Auto coverage is very simple. It is a combination coverage of man and Cover 3 and all positions will key their run read first. The LBs key the near guard through to the backfield, or what we call the essential “triangle”. The SS and $ will key the end man on the line of scrimmage or the uncovered offensive lineman if he playing the high safety. The FS will key the uncovered OG to the OT. Lastly, the CBs will key the #1 receiver.

From the safeties perspective, a #2 receiver can be a WR, TE, or if 2 backs, a RB out of the backfield. Once he makes an “up or out” read on #2, that man is his man and he must stay with him in proper leverage. We are trying to squeeze all vertical routes by the #2 receiver into the FS by being physical on the receiver’s outside hip. The FS is essentially playing the middle 1/3 of a cover 3 look. Depth and middle of formation are his main thoughts as the play develops. We want the FS to be breaking downhill on any ball, similar to how he would play Cover 3 or Cover 1.