I think that some of the most important aspects of a defensive scheme is having the ability to fit your scheme and concepts to your current personnel while having the ability to evolve and adjust to the always-changing offenses. Another must that every defense must have is the ability to make quick adjustments without any confusion. You will always hear coaches and players talk about half-time adjustments, and they are a particularly important part of the game. If you wait until half time, too much damage may have already been done. We must have a way to put out fires, especially in high school, where some players go both ways. We try to combat this by fusing some adjustments into our defensive schemes. We use split field coverages inserting verbiage tags into the coverage concepts to help adjust quickly. The verbiage tags keep all the concepts like the players and if we need to add something, it is much easier. I also think it is especially important to make any necessary adjustments to coverages that you learn and add to fit into your scheme. One of the ways we will disguise our coverages is by making them look the same. Always remember that no confusion equals fast physical play.  There have been many influences for me as a defensive coordinator. Some of the concepts I have learned, and I am using now are being taught by Don Brown, Kirby Smart, Brent Venables, and Nick Saban. Sometimes the best teacher is trial and error with your schemes. For this report, I would like to talk about the system we use to merge our quarters and Cover 1 concept and schemes. 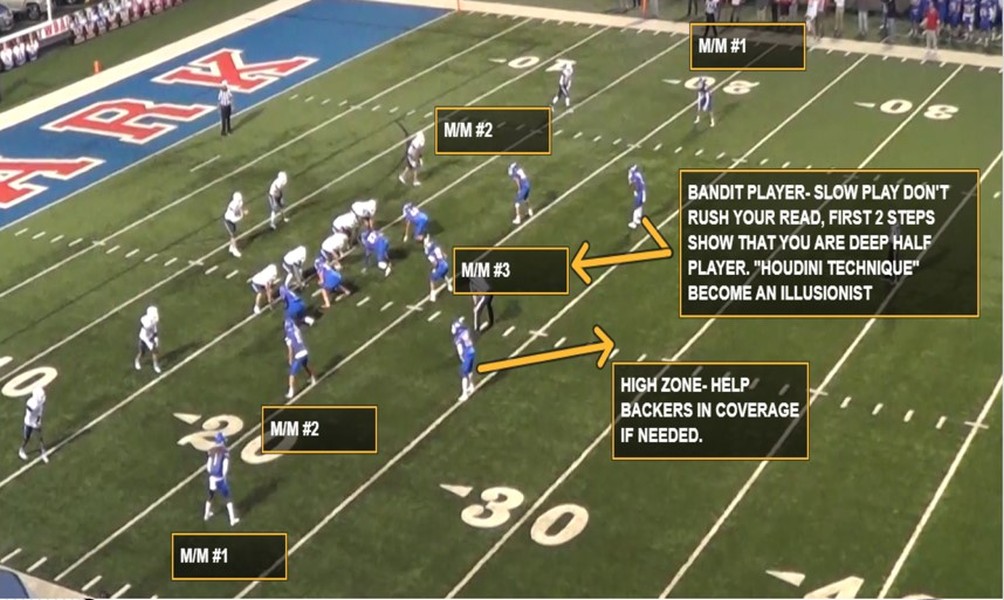 Since we play a high percentage of quarters coverage, we like to play Cover 1 from a two shell. We play a 4-man front and will morph into and play both a 4-3 over/under look and a 4-2.  The Sam/Star linebacker is the adjuster; he will move in and out of the box depending on the call. We can use two types of players in this position. Everyone wants that true hybrid player and if we have one, he is the obvious choice. We also will have certain secondary players learn the Sam/Star position. As coaches, we will get the personnel matchups we want but we will not have to teach another scheme. The scheme will stay the same while we adjust the calls for the personnel in the game along with the down and distance, personnel grouping, and all the other variables the offense brings to the game.  We will give the same look while making it easier for the secondary to adjust.  By using the 2-shell concept, one of the safeties is responsible to carry out different assignments depending on the tag.  One aspect of this scheme is a “top the fit or cap player”, a free hitter (Don Brown – city coverage).  This scheme will help vs RPO’s. We do not want our linebackers to have to worry about defending the RPO pass. This coverage will help us keep the integrity of the box, letting them play the run.  We can use our safety to help the “conflict defender” depending on the tag that is called. This system allows the coverage to be set to get your safety where he is needed. 80-85 percent of RPO’s we see come from the side of the back. We also will coordinate the coverage scheme with where we set the three-technique.

Since quarters is the first coverage concept that we install we teach the coverage and its variations and from there we will install our Cover 1 schemes.  The Cover 1 package starts from a two-deep look; this will mimic our quarters' coverage pre-snap look, so the defense looks the same when combining the two schemes. This also allows the secondary to stay fluid when making formation checks. This package does not need to have quarters with it to be effective as you can use it and morph it to fit your specific needs.

Bandit: This concept will allow the SS to come down into the box post-snap. The SS and the M can “duo" the back (pick up in coverage depending on the release); if a pass the M or SS, who is not in coverage can play “Rat” or Blitz depending on what you want. Other aspects that can be used are providing gap protection for a blitzing M or provide coverage for the S/* when he blitzes. When game planning with the bandit player, you can place him where you want based on formation for example. This would be done post-snap keeping the integrity of the two-shell. After analyzing the opponent breakdowns, you can have an alert call for a specific formation, down and distance, or whatever you feel the need to. If an offense runs certain route combos out of certain personnel groupings, practice that during the week and alert it with your defensive calls.  For example," Over Mod alert Bandit" we are playing mod unless we get 11 pers ace pro and we will check to bandit and the bandit player will rob the TE. 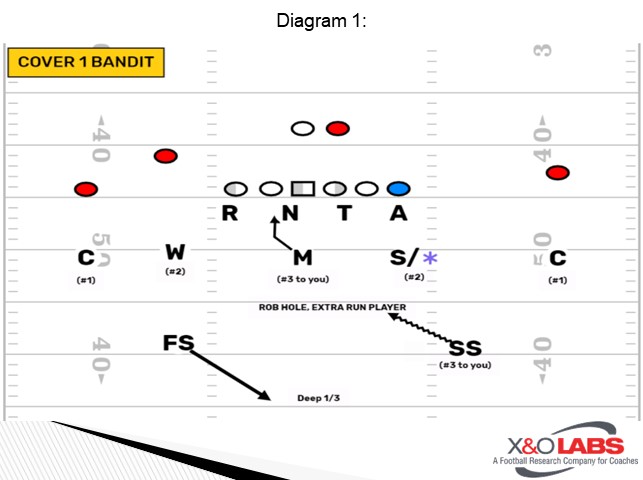 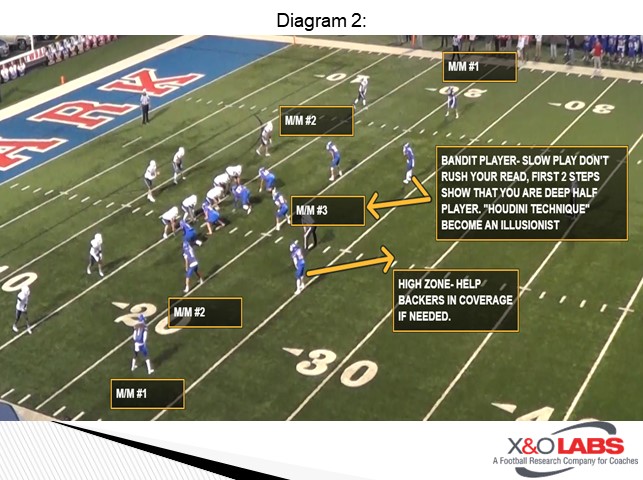