The ability to utilize Fire Zone Blitz concepts on any down and distance allows a defense to be multiple and defend numerous Formations and blocking schemes without checking out of most calls. In our league, here in Anne Arundel County, Maryland, each of our opponents present diverse formations, motions, run schemes, pass protections, and pass combinations out of a variety of personnel packages and tempos. As a defensive staff, we feel being a heavy zone pressure team gives us an opportunity to dictate the game and concern ourselves more with what we are running versus having to have a litany of checks per formation, motion, personnel, etc.

As a 76% blitz team here at Southern High School, we primarily use a 3 under 3 deep coverage scheme behind our zone blitzes. We feel it is the most important part of our blitz scheme in that it allows us to blitz while focusing on eliminating big plays and dictating how the ball will be leveraged from the outside-in as well as creating turnovers to get the ball back to the offense.

Unfortunately, a 3 under/3 deep scheme is sometimes referred to as a “cheat” coverage because it is relatively unsound in the immediate flat areas, the deep seam, and in the middle of the field between 15 and 20 yards. Every year we do an efficiency report on our Defense looking at all passes over 10 and runs over 15 to determine why these plays happened. In over half of our completions over 10, Hitches and bubbles were the routes completed and either created a first down or a long gain.

To challenge these short throws without giving up our blitz identity, we have gone to incorporating some of our quarters techniques into a Rip/Liz match cover 1 scheme against 10/11 personnel and formations where #2 and/or #3 is removed.

Every year our defensive staff creates a report and cut-ups within HUDL of all our completions given up over 10 yards to determine why the Blitz didn’t get home, why the throw was a completion and was the completion caused by either a lack of technique, a lack of execution, or a lack of effort. Below is an example of the excel sheet we tabulate. 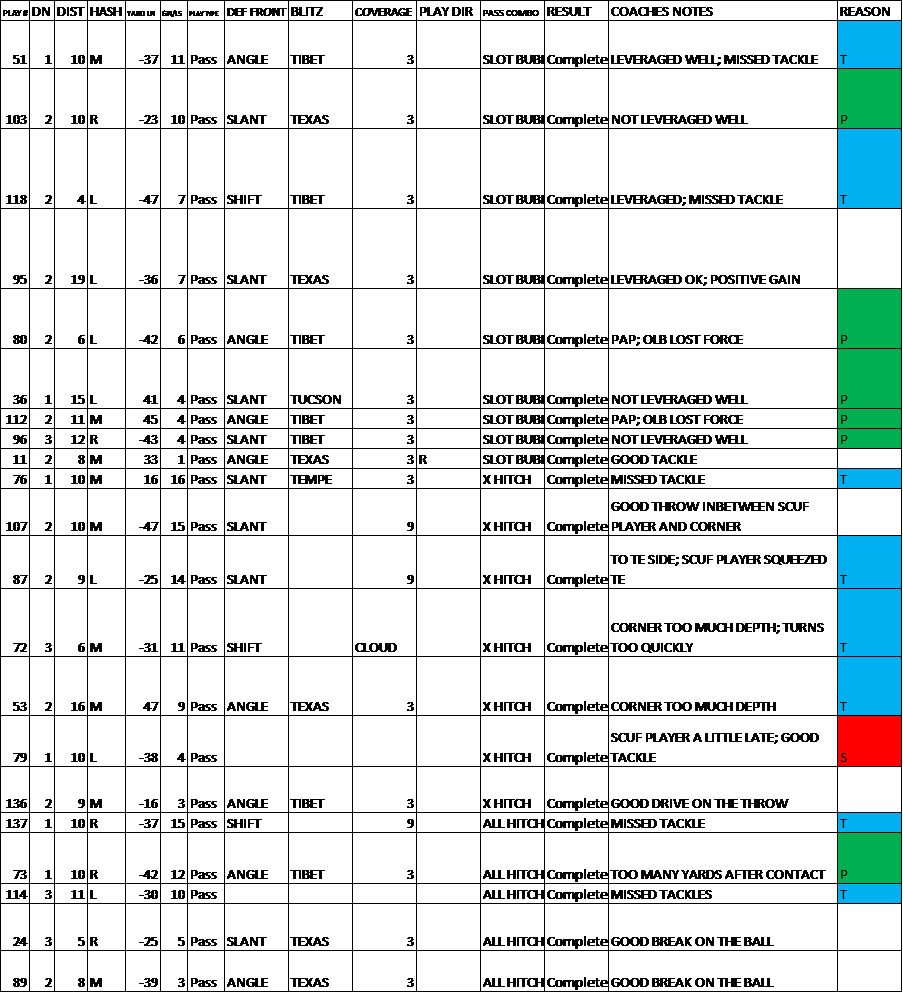 This report is the 21 passes over 10 yards we gave up as a Defense from 2015. In the 12th Column we tabulate what route or route combination each of these completions was and from the data collected, Hitch and Bubble were almost 1/3rd of all passes completed over 10 yards. Before this year we were primarily a 3 under 3 deep team using some match principles but giving up or “China” calling any non-threatening route by #1 (basically hitch) and coming off late and rallying to the bubble. Our goal was that the Blitz would get home and the QB would either get sacked, flushed, or that the pressure would cause an error in footwork or decision making that would lead to an incompletion or turnover.

We think in a “worst case scenario” frame of mind quite a bit as a staff and try to rep those situations as a defensive backfield when the blitz is either picked up or the pass is off, so we must play coverage. To alleviate the quick throws, our goal was to play more pressed coverage out of quarters/Read 2 principles. However, with no post safety vs 2x2, we were way more subject to the RPO game and 4 verticals, which becomes a match-up issue 4 on 4.

This past year, we experimented and successfully ran a match-up cover 1 (Rip and Liz verbiage) from a pressed alignment while keeping our blitz on and adjusting to 3x1. From a technical aspect, we relied on our pressed quarters' technique and pressed quarters rules specifically for our Corners and coached our MOF safety in more of a "robber" technique to add him to the run fit.

Even though this article is about Cover 1 and Fire Zone, it is warranted to first touch on our base verbiage and what the Blitz and non-pressure sides are doing. In our base defense, we will set our front either to the field or the boundary, to or away from the multiple receiver side, to or away from the TE, or to or away from the Back in the shotgun. Where we are setting the front is a weekly game plan decision. Every snap we make either a "Roger" or "Louie" call which dictates where the 4th rusher is coming from and if we are in a 3-deep situation, where safety support is spinning. Our Interior linemen always slant away from the front call (Roger/Louie) as the 4th rusher (our call side OLB) becomes the C gap player/5 technique call side. The reduction side call correlates with a coverage call to establish who the force player is to the reduction side as well as who the seam player will be. All our same-side ILB/OLB or "edge" blitzes correlate with a Roger or Louie call, which we feel makes it easier for our players to identify and gives them a chance to focus more on the disguise and triggering the blitz from a proper depth and angle.