You can always spot a defender in conflict. He is the one sprinting in from the outside to fill his gap on an inside zone play. Only, it’s not a run - the QB pulls it and throws to the perimeter. This defender is now turning and sprinting back to the outside, while his pass responsibility is gaining an easy first down. Run-pass options have been effective in recent years by exploiting defenders that are “in conflict”, or asked to do two jobs. A linebacker that is responsible for both an interior run gap and also an outside passing zone is “in conflict”. He cannot fill his gap and also simultaneously fulfill his pass responsibility. It is one or the other. In the past, defenses could get away with teaching defenders to have a run gap and also a pass zone, because a run was a run, and a pass was a pass. As long as the defender made the proper run-pass read off his initial key, he would get to where he needed to go. However, the RPO has exposed the flaw in having defenders tied into both the run game and the pass game. 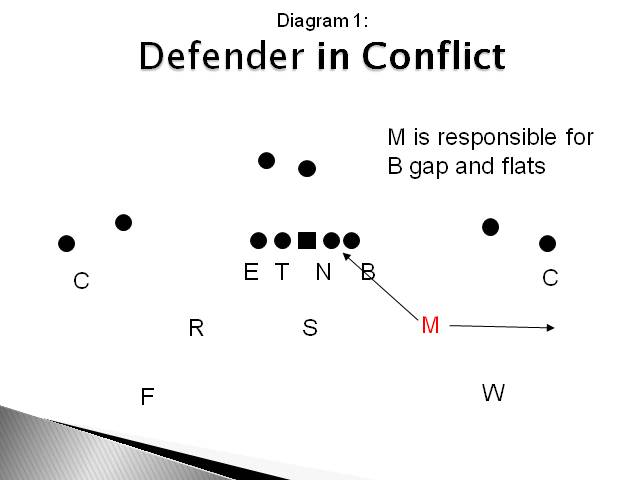 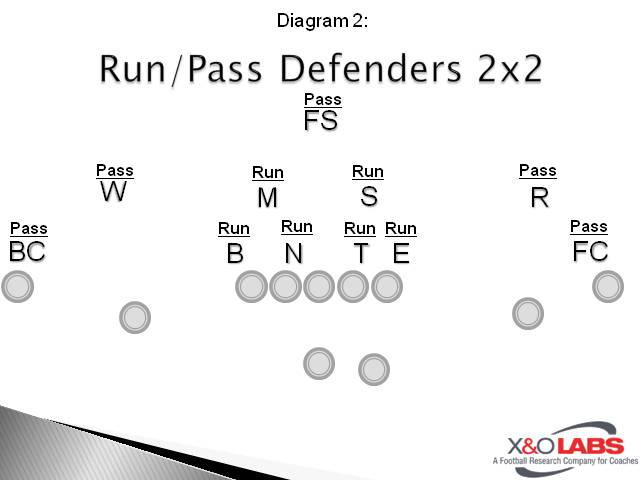 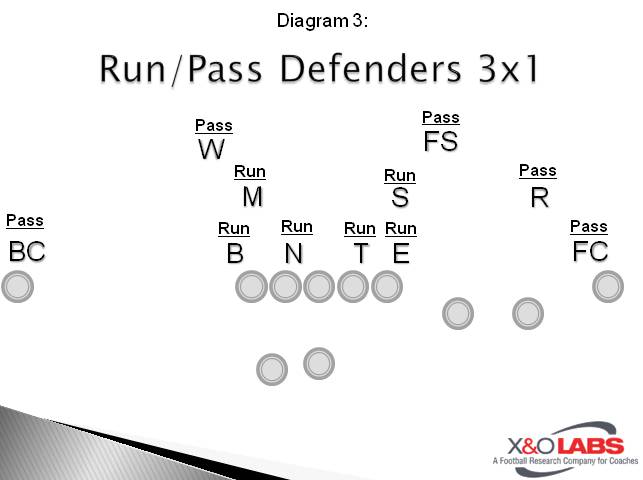 By identifying who is responsible for run and who is responsible for pass, we prevent anybody from being in conflict. We will always have all run gaps covered and we will always have all receivers covered down. This system allows our players to aggressively play their responsibility with no conflict. Run defenders can focus on eliminating the run, while pass defenders can focus on stopping the pass. This concept is certainly nothing new or revolutionary that I’ve come up with. Everything I know and teach, I stole from someone else. However, I hope to be able to share some of these things I’ve learned and that you can find them useful as well.

Although we have changed alignments in the past, we now align our slot defender (on #2) in outside leverage at five yards depth, keying #2. I believe that if a DB is to be pass first, he should have his eyes there to begin with. Since we have at least six defenders dedicated to the run inside, we do not need the slot defender to have his eyes on the EMOL for a run/pass read. Pass first defenders are late to the run game. We align in outside leverage because we want to force vertical routes inside to our MOF defender.

Our corners will almost always be in press alignment with inside leverage. Press is particularly helpful against RPOs because quick or short passes to #1 are much harder to complete. We align with inside leverage because we want to force vertical routes to the sideline.

Although there are many different types, the RPOs that we see the most are what we call “zone read triple”. The interior mechanics of the play involve zone blocking, with the backside end being unblocked (and read by the QB). The outside part of the play usually involves a vertical release by #2 (pop pass, hook, etc) or a bubble by #2 (which could be accompanied by #1 blocking or running a slant). For this article, we will focus on this type of RPO.