Zone concepts like cover 2 and cover 3 allow DBs the freedom to read the QB and make lots of plays on the football, although they also present the challenge of having to defend multiple receiving threats in an area of the field. This happens most often for us when a defender in an underneath zone is “high-lowed” or when a defender in a deep zone is stretched vertically by multiple receivers. To better position our DBs to defend these concepts, we teach “midpoint” principles in zone coverage, which allow defenders to play in-between multiple receiving threats in their zone and react to the throw. 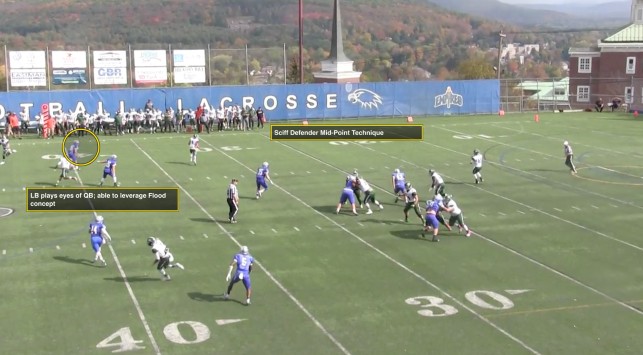 It’s important that we first educate our players on the distinction between zone coverage and man coverage. This may seem obvious, but it will help our players to better understand their teaching and why we are doing what we are doing. Man coverage for us is not necessarily going to be just straight man-to-man. Some coverages like quarters will still fall into the “man” category for us because of the key reads for the DB’s. Simply put, if a DB has a “man key” at the snap, then it is a man concept coverage. By contrast, when we play zone coverage, DBs will key the backfield action/QB rather than focusing on a specific WR at the snap.

Eyes are on a WR at the snap.

Man Key will define both our run and pass responsibility.

DBs cover a specific WR on the play.

the initial read will indicate either outside run or pass.

Any ball off the line (of scrimmage) action such as an inside run or drop-back = PASS to deep zone defenders.

DBs cover an area of the field and do not lock on to one WR.

Again, these distinctions may seem somewhat obvious, but it helps our DBs to differentiate between man and zone concepts, especially with their key reads. While man coverage is usually considered much more physically difficult than zone, it is also much simpler in concept. Zone coverage requires DBs to make reads on the QB, recognize different route concepts, and anticipate throws. One of the challenges to playing zone is defenders being stressed by multiple threats to their zone in some route concepts. How we handle this depends on the coverage but the unilateral principle we will use is to “midpoint” the zone.

In Cover 2, the midpoint technique comes into play for the corner most often vs. the “smash” concept, with the corner being “high-lowed” by an outside vertical and a short route/hitch to their side. The corner is technically an underneath defender in cover 2, responsible for the flat, and the smash route poses a challenge for him. If he is too aggressive on the hitch, he leaves us vulnerable to the ball being completed behind him in the cover 2 “hole”, before the safety can get there. If he gets too deep to prevent that throw, the hitch will be completed with ease. Teaching him to midpoint these routes can help position him well to defend both throws, while also creating indecision on the part of the QB. 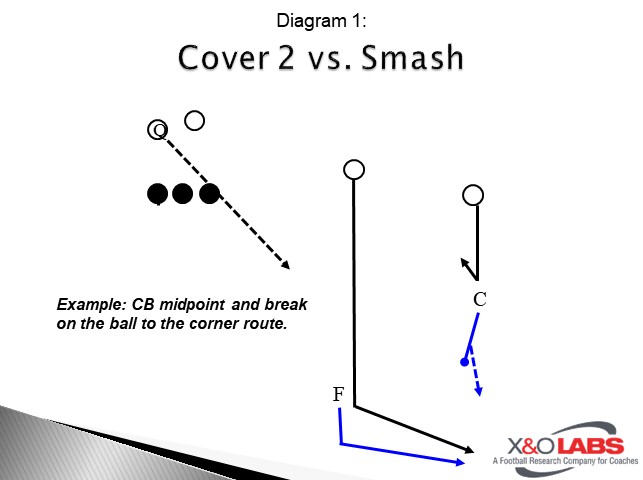 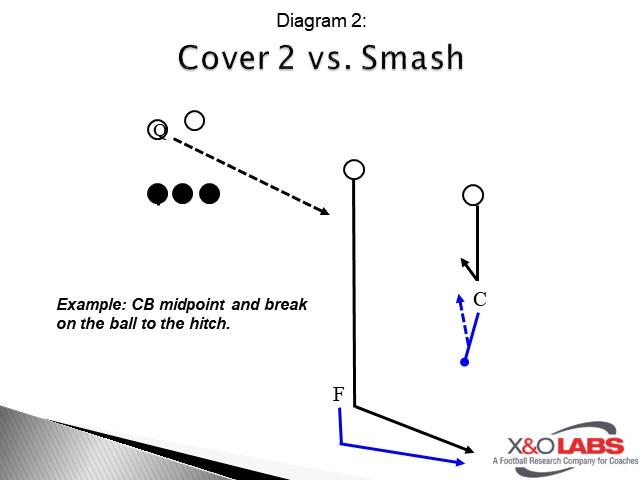 It is important to note that while we do often use landmarks in zone coverage, and those landmarks will come into play later when discussing midpoint technique for deep zone defenders, we do not use landmarks for the cover 2 corner vs. smash. The main reason for this is because the ideal positioning for this route depends on several factors that can vary from opponent to opponent. Instead, we focus on specific coaching points to put the corner in the best position.

Bait the corner route with body positioning then drive the hitch.

Read the front shoulder of the QB for the throw.

Depth and Width vary based on several factors.