At New Palestine, we are an aggressive, up-tempo, no huddle, power spread offense, and a blitz-heavy 3-3 stack defense. When I became the Special Teams Coordinator, I wanted to bring that same aggressiveness to our special teams. We tell our kids we play fast and hard and to put a strain on our opponents on downs 1, 2, and 3, but we weren't really doing that in the kicking game. In the other two phases, our expectation is to punish our opponents relentlessly, but then we gave opponents a bunch of hidden yards on 4th down. Why? Our defense works so hard to get off the field, why don’t we take advantage of that in the kicking game?

New Palestine is in the second-largest class in Indiana, so we play against some incredibly talented specialists, particularly kick and punt returners. We only have around 45 players on our varsity roster in a given year. With those two factors considered, the decision about who plays on specials is an easy one for us. Our best players play. We approach it with an attitude of required effort. If you won’t play hard on special teams, you won’t play at all on offense or defense. It’s what we need to do to win. Here’s a look at how we implemented this on our kickoff team.

The last two seasons, we have not had a kicker with a monster leg. We have to go cover kicks. In past years, lining up five players on one side and five on the other didn’t work for us. Our best players were getting double-teamed. Wedge returns were killing us because we preached lane integrity. This past off-season we felt like we needed to make a change to get our best players a better chance of getting to the ball, not depending on the return taking the ball to them. So, we elected to let them go straight to the ball.

We now give our best three tacklers the opportunity to line up wherever they want, run directly to the ball, and make tackles. We call them “Hitmen.” They have no set alignment or assignment. They are encouraged to align differently on every kick so our opponents can’t account for them with the same player each time. The other 7 players on the coverage team still have a lane they are responsible for, but the other 3 are free to take whatever attack angle they deem appropriate. 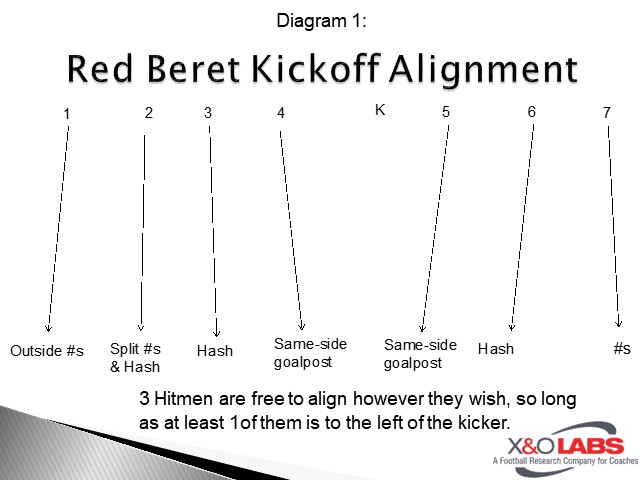 Our 7 “regular” players line up 4 yards deep instead of the traditional 5 to allow our Hitmen to move freely around the formation during the approach.  Our kicker always kicks from the dead middle of the field.

We do NOT believe in safeties. Our edge players are full speed on the rundown, but smart about making sure nothing ever gets outside them.

Here are some alignment examples that I'll talk more in-depth about throughout the course of the article: 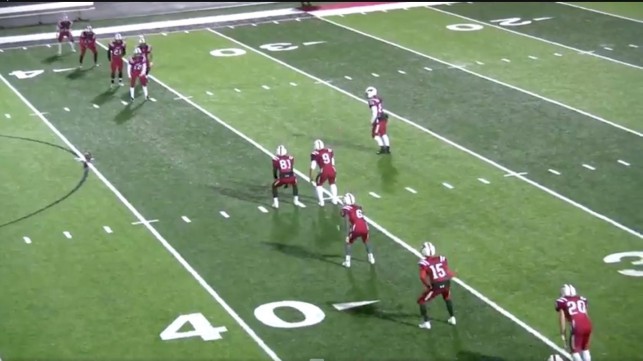 Notice how in the kickoff above, Hitmen technically represent players 4, 6, and 10 as you count from left to right. The photo below is the very next kickoff in the same game. 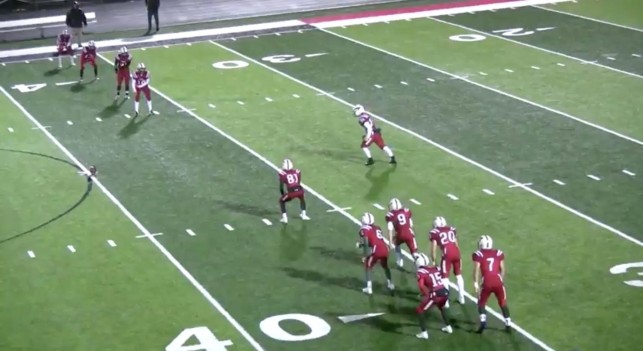 They now represent players 6, 8, and 10, which can completely change how our opponent would block them. 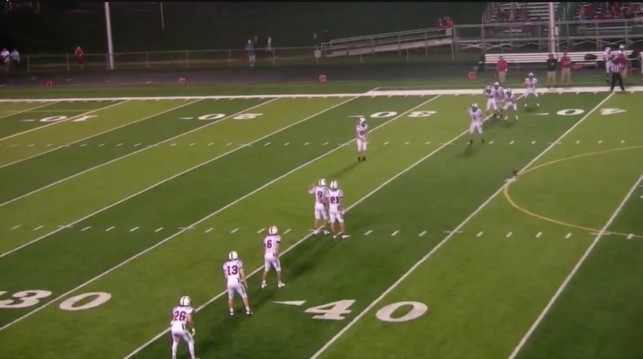 In the instance above, we have created a bunch at the top of the screen. By grouping 2 Hitmen together with one of our regular players, it becomes more difficult for a man return to sort out exactly which of the 3 players belongs to them. Against a traditional single wedge return, it forces the front line players to make difficult decisions about who gets blocked and who gets released to the wedge.

This quads-type look was particularly effective, and one that I encouraged our players to use as frequently as possible against any type of return.

In these 4 photos, you see four totally different alignments, in some cases moving freely between a 5 & 5 alignment and a 6 & 4 alignment, with little to no actual adjustment made by our coaches within the game itself.

We employ a small set of guidelines for our players to think about when we face a certain type of return. In this article, I’ll talk about the three main types of returns – full man-blocked returns, a single-wedge return with man blocking in front of it, and a traditional double-wedge with no man-blocking elements. Almost all returns will, in one way or another, fall into one of those 3 basic categories.

Man-blocked returns are inherently based on the return team’s ability to identify their assignment before the kick. We coach our hitmen to think about three things when they line up against a man-blocked return: