4 Keys to Maximize Your QB’s Accuracy, Velocity and Timing 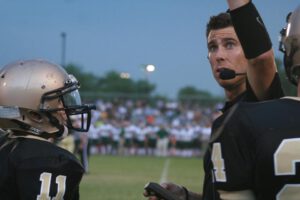 In an excerpt from an ESPN The Magazine article by David Flemming, The Pursuit of Throwing Perfectly, Flemming writes, "Most exercise scientists and kinesiologists agree that throwing a football at an elite level is, in fact, the most complex motor skill in all of sports."

That’s a bold statement for a biomechanical movement executed by knee-braced 40-somethings, face-braced 14-somethings, and armchair-let-me-tell-you-somethings all around the country. But just because nearly anybody can drive a car, that does not qualify them to race at Daytona.

As complex as the throwing mechanic is, there are four key principles that must be executed consistently for a quarterback to maximize accuracy, velocity, timing, and ultimately performance.

1. The Quarterback’s Throwing Arm Must Reach 90 Degrees in the Elbow and Armpit

For the arm to track through the sagittal plane, improving lateral accuracy, the elbow almost inevitably must position straight back at 90 degrees before it rotates up and over to the target (Photos 1, 2, & 3). The key point to this mechanic is getting it to that position as quickly and efficiently as possible, so that it can begin moving forward, thus reducing the time it takes to execute the throwing motion. Using a longer arm by straightening or extending the forearm on the backhinge, or circling down and around to the 90 degree position, instead of hinging straight back, lengthens the radius of the throw, making it take longer, move slower, and ultimately sacrificing velocity and distance. Think of the arm like the more complex trebuchet compared to the simplistic catapult. 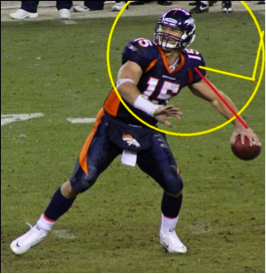 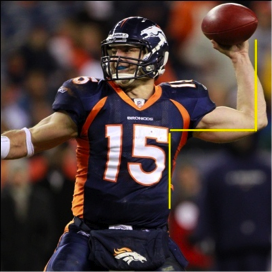 2. The Quarterback’s Elbow Must Track Up and Over the Shoulder Directly at the Target

Projectiles go straight. So an arching force, like a throwing arm, that has any degree of horizontal path creates nearly 180 degrees of possible vectors for the ball to take. A ball released just a thousandth of a second early, just one degree too soon or too late, will forever be one degree off target, which is a mistake magnified by distance. Therefore, the optimal throwing plane is one that tracks through the sagittal plane (down the midline of the body) instead of through the transverse plane (around the spine of the body). 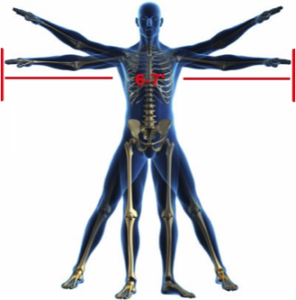 Therefore, the variances of release point affects vertical targeting, but not lateral targeting. For example, a right-handed quarterback who slashes horizontally across his body will miss to the right with an early release, and to the left with a late release. With an arm path in the sagittal plane, the window of completion opportunity grows from the smaller lateral window of, at best, roughly six feet -- the lateral wingspan of a grown man (Photo 4) -- to the distance from the ground to the highest reaching point of the receiver which is closer to a 10-foot window (Photo 5). A ball two feet too high could be a touchdown, where a ball one inch too wide could be an incompletion.