While it is becoming more and more "sexy" to talk coverage and pass rush, we all know if you don’t stop the run you don’t win football games, and stopping the run at any level starts with the guys up front.  This includes stance, get offs, one on one block destruction and two on one block destruction.  Our defensive line techniques must accomplish one of three objectives; having a defensive linemen make a tackle at or behind the LOS, making a play bounce so our perimeter can tackle a horizontal runner, or eating up blocking schemes so our ILB’ers can see and fill windows unblocked.

Our goal is to teach concepts that relate to any opponents run scheme from gun read to wing-t and everything in-between.  This allows us to teach a few techniques and master them, so we are not putting in "the defense of week."  What follows are a collection of drills and techniques that we use at Mukwonago to stop the run by our defensive linemen thus making teams one dimensional.

We put all run blocks into two categories – attack blocks and escape blocks.  Attack blocks are any blocks that our read key attacks us with – Reach, base or zone, high wall (turnout), drive block, true DBL team.  The other blocks, veer, scoop, arc, pull are escape blocks.  We teach our defensive linemen base rules to handle an attack or an escape scheme, which should carry over to many of the individual blocks within that category.  Let’s take a look at attack blocks using some examples.

We will take on all attack blocks with a stuff technique.  We are a multiple front defense, but all a stuff technique tells us is that we are responsible for the gap we aligned in or are slanting to – again a stuff technique is triggered by attack blocks.  Stuff technique is first taught with our hit drill (Diagram 1). We start from our knees and attack the nearside of the far number and the arm pit to our gap.  Our elbows are in, thumbs are up and we are hitting our aiming point while bring our hips with us.  We get three reps a piece from each shade. 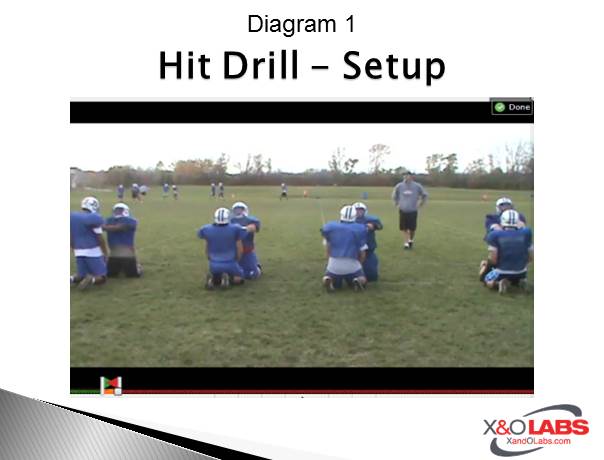 From there we will take the stuff technique and work on getting off the ball and knocking all attack blocks backwards.  Again from a reach to a drive block, we want to take the fight to the offensive linemen and knock them back as to play on their side of the LOS.  One set of drills we do daily is our "pit drills" (screenshot 2); have the defensive linemen partner up and face each other with a crash pit behind them.  The coach will then give the players replicating offensive linemen an attack block to execute, the defensive linemen must recognize that his read key is attacking him and perform his stuff technique, driving attacking OL men into the pad.  The key to this drill is two hard steps by the OL men and then the player on offense allows the defender to knock him back on to the pad.  Great for multiple purposes but most importantly it teaches taking on a one on one attack blocks by reestablishing the LOS and controlling our gap with our stuff technique – you can do this from slanting or from normal alignment and use it for any attack style block. 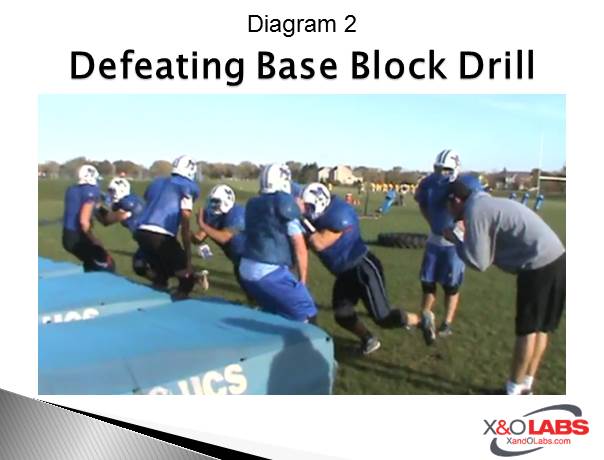 The above screen shot shows us defeating a zone base block by fighting pressure with pressure getting the offensive linemen’s shoulders back to parallel, keeping our head in our gap and then finishing the drill by driving the player back into the crash pads.  We are a little too high as a group in the above shot; one variation is to incorporate your chutes into the pit drills.

Reach Block - Extend with play side arm while making sure your play side hip and helmet are in your gap while attacking downhill (*note - in reach away we will keep our nose backside because that is his gap, do not start changing rules) ripping off when we start to get our shoulders turned.  We work this at least twice a week.