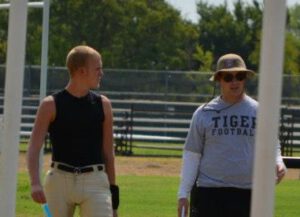 I’ve been extremely fortunate to work for two head coaches who have great trust in their offensive staff -- asking only that we move the football and score points. As luck would have it, we have done just that. In only one season under this current offensive regime, Irving High School (Texas Class 5A) saw a 186% increase in points per game and an 82% increase in yards per game from the previous three year average. This can be attributed to three things: a great offensive staff, which prides itself on cohesion and honesty about what our kids can and cannot do; great kids willing to adapt to a new system; and a solid, balanced scheme.

While I could write hundreds of pages on the former, it is the latter that will garner the focus of this article. At Irving High School, we run what is generically called a pro-spread offense, assuming we can agree any offense utilizing three or more receivers in multiple formations is in fact an evolution of the spread, and that incorporating a tight end and full back makes you pro style. Moreover, our goal at IHS is to be balanced offensively. It is our opinion this can be achieved in a multitude of ways, with the most obvious being an approximate balance between run and pass. Our identity, however, is truly found in our run game: a scheme utilizing misdirection as well as zone and gap scheme concepts.

The primary focus will be on four plays: 1) pop, 2) pop-power, 3) pop-zone and 4) pop pass. All of these plays begin with the "pop" or "fly" sweep. Obviously, the ability to run just the pop is a great, but is not necessary to achieve success with the other plays as the misdirection will achieve the desired affect regardless, albeit a slight ruse.

For the purpose of time and space, the four plays outlined in this article will only be shown against one front. 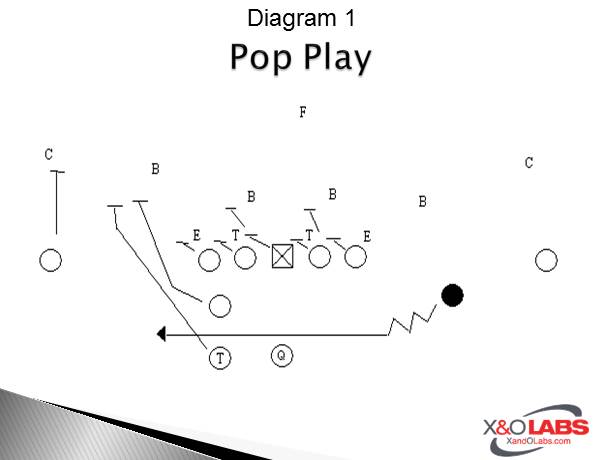 The first play illustrated is the pop. Timing is critical and will be a theme throughout. The inside receiver must sprint across the formation at full speed. It is not his job to slow down and receive the football. The quarterback is responsible for getting the football cleanly to the receiver. Likewise, he must snap the football as the inside receiver is approaching the near tackle. Once the ball is snapped the quarterback will put the ball in the receiver’s belly and ride him for two steps, ultimately relinquishing the football. The fullback will offer a hand to the defensive end and will work to the force player. The running back (T) will attack the force player right now and work to next level if the force player is already engaged. The offensive line will execute a full zone technique, working to space more so than a man. 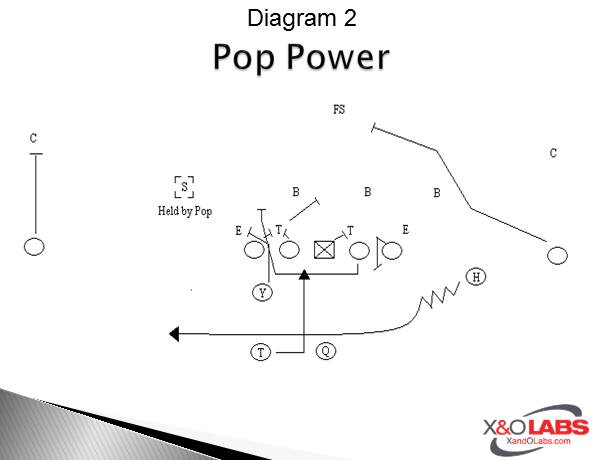 Timing is vital in this package. It is crucial the ball be snapped just before the inside receiver reaches the offensive tackle. The pop runner must be at a full sprint by the time he reaches the tackle. The running back (T) must allow the pop runner to clear as he takes a small slide step toward the quarterback. This action does two things; it allows the running back to see the hole develop and slows him down, forcing patience. The quarterback will offer the ball quickly to the pop runner, and then open his body to the running back, placing the ball in his belly and stepping with him into the line of scrimmage before ultimately relinquishing the football. The quarterback should then take a quick three step drop showing an action pass.