Varying the Power For Maximum Success 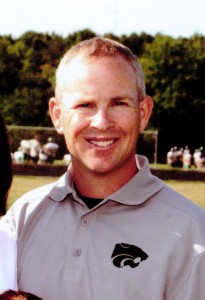 In 2010 our head coach, Tim Lewis, decided that we needed to switch from a spread offense to a multiple I-formation offense. The main play that he wanted us to be able to run, no matter the defense, is the Power. Coach Lewis also wanted us to be able to run Power out of multiple formations within our offense.  Since 2010, Power has become our go-to play. In 2012, we ran Power, or some adaptation of it, more than any other play. We averaged just over 5 yards every time we ran it.

Our offensive line coach, Patrick Cory, along with other coaches on our staff, came up with blocking Concepts for each of our running plays. We use Concepts in order to make teaching easier. We rarely have a missed assignment along our offensive line due to our linemen not knowing whom to block. Using Concepts enables us to be flexible with our offensive linemen, which allows us to easily move them around in order to get our best five on the field. Concepts allow players to quickly make adjustments based on the front they are seeing. Our Concepts are not rigid, rather they are fluid, allowing players to play as hard and fast as they can.

Our base Power play is run just like the classic Power O scheme. The Concept for the front side of our offensive line is to build a wall, looking for double teams at the point of attack. Our front side includes the tight end, if there is one, tackle, guard and center. They will leave the end man on the line of scrimmage (EMLOS) for the fullback and the play side linebacker for the pulling guard. We use the concept of building a wall to create an image for our linemen in order to visualize what the play should look like.  Essentially, the play side linemen will block down away from the gap where the play is supposed to hit. The pulling guard will read the fullback’s block on the EMLOS. Our rule for the guard is "See a butt, turn it up; nothing found, bounce it around." The guard will stay tight off the wall and lead to the play side linebacker. It is critical that the guard stay tight to the wall in order to not over run the play side linebacker. Tight off the wall is meant to encourage the pulling guard to attack up into the line of scrimmage, taking the hit to the LB, and not vice versa, which plugs the hole.  The backside tackle and tight end will block the defender over them.

The tailback will open step with his play side foot. He will then crossover with his opposite foot. His third step will be a lateral step.  He squares his shoulders to the line of scrimmage and follows the pulling guard into the hole. He reads the guard’s block on the play side linebacker. It is critical that the tailback gets north and south quickly through the hole. Once through the hole, the runner looks to stair step to the hash, numbers, and sideline on his way to the end zone.

Our fullback’s responsibility is to block the EMLOS, who is defined as the first defender outside the tight end or nub tackle. His block is critical to the success of the play. The fullback will take a lead step with his playside foot towards the line of scrimmage. His second step will be at a 45 degree angle toward the EMLOS. His third step will begin to flatten parallel to the line of scrimmage. We call the fullback’s path a J-Path in order for him to visualize the correct steps and angle.  He will then aim for the inside hip of the defender and attack it with his outside shoulder. His task is to block the defender out and create a gap for the tailback and pulling guard to run through. If the defender crashes in hard in order to "wrong arm" the play, the fullback will block his outside hip, making sure to get his own hips around the outside of the defender in order to seal him inside.

Any receiver aligned on the outside will accelerate off the line of scrimmage on the snap and sell a deep pass route. If he cannot get the defender to run with him, he will break down and stalk block him. Diagram 1 illustrates our base Power play. 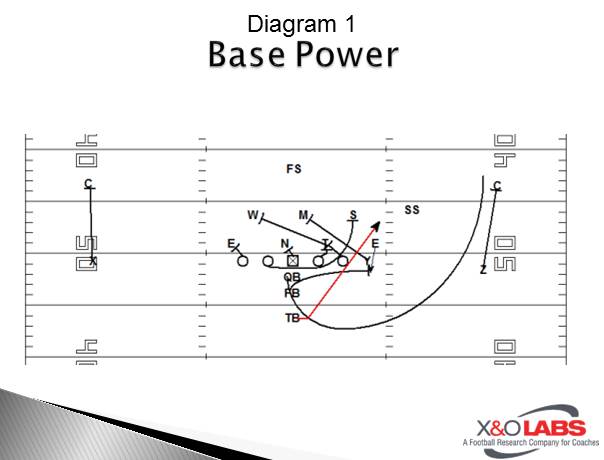 To see video of Coach Miers' Power scheme, click on the links below: