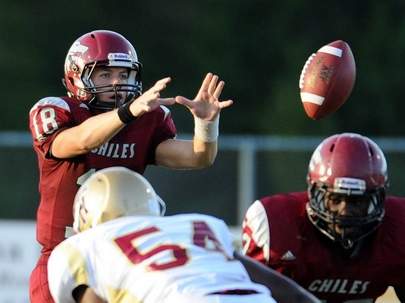 The QB Ride Series is a series of QB run plays out of shotgun sets.  The QB run game is an important element to most spread teams because it presents a numbers issue to the defense. It also provides an added element to the QB run game by providing misdirection and the illusion of an option game.

At Leon High School we are a power and option oriented run team.  We like to run these plays in multiple ways.  We then will run the inside and outside zone, particularly the outside zone/stretch scheme as a compliment to the power runs.

The QB Ride Series is a compliment to our outside zone/stretch and sweep plays.  We run it when Linebackers and Safeties are over-pursuing and not staying in the run lanes, or when defenses become over aggressive on the edge versus outside runs.

The QB Ride Series is an effective counterpunch for any team that runs outside zone/stretch and Jet/Fly sweep plays from the gun.  The benefits include:

The "Ride" is a long, exaggerated run fake to a RB, or motion WR, who then sprints towards the sideline selling misdirection.

During the "Ride" the QB will shuffle one step with the ride, then pull and run the called play.

The two base runs in the QB Ride Series are: Ride QB Power and Ride QB Counter.  These two plays entered our playbook during the Wildcat phenomenon of 2009.  While the Wildcat formation and substituting an athlete in at QB has faded out of our playbook, these fundamental plays remain today.

The Ride QB Power is our primary run complement to the outside zone/stretch play and Jet/Fly sweep series.  When the play side LB and Safety are flying out of the box to stop the outside run we counter punch with this play.