Last season was our first running a spread offense here at Becker College. Every coach has a system and way of coaching certain schemes and plays that must be matched to the personnel in the program. Like most spread teams, we run a zone read running play. In designing this play to fit our offense we had to look at the players we had and figure out how to get the most out of our first day of installing the running play.

We have a talented running back and athletic wide receivers but an inexperienced quarterback that is more of a pocket passer than a runner. We had to figure out what to do on the backside of where we were running the ball. Since the read component of the play dictates that the quarterback may end up with the ball in his hands after the initial read, we had to figure out what would we do next. Do we have the receivers block for a quarterback that prefers not to run?  Do we force the defense to defend both run and pass on the same play? The following are some of the ideas we put in place to maximize our personnel within the construct of our spread offense to attack how teams in our conference aligned to certain formation.

Once we get into the red zone we see a variety of coverages in our conference. Teams give us a variety of looks; whether it be two high safeties, one high safety or no high safeties. The beauty of the backside passing combinations is that typically a linebacker is now forced to decide whether to drop into coverage or pursue the quarterback post pull.  We automatically put him in a conflict.

The most common backside combination run is bubble, where the outside wide receiver blocks the man over him and the inside receiver runs a bubble route. A linebacker must now decide to run with bubble or attack the quarterback. Given our youth and lack of size this past season, blocking was not our receivers’ strength. Too many times the corner would defeat the block and make a play on the bubble so we decided to add a slant by #1 to the bubble by #2 (Diagram 1). 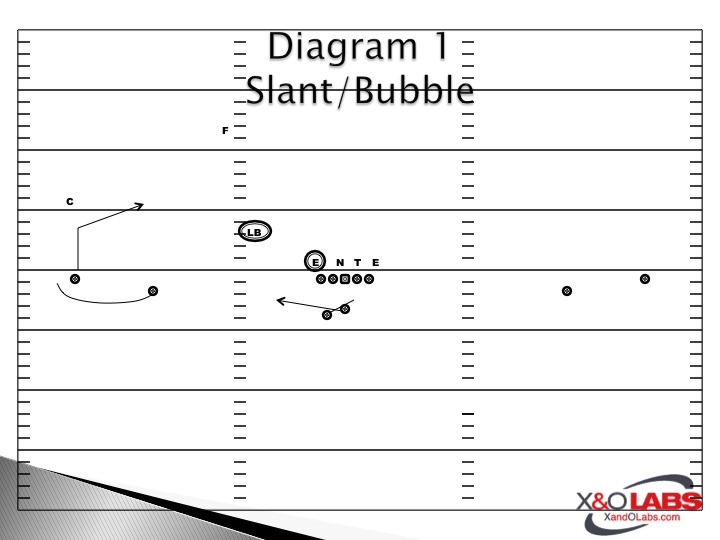 We ran this backside combination between the plus 10-20 yard lines because in this area on the field safeties still must respect deep routes and cannot alter their alignments by cheating towards the LOS. Once the quarterback pulls the ball after his initial read, his eyes now go to his secondary read (play side box linebacker) while running towards him. His secondary read will tell him to either keep running by either dropping into coverage or running with the bubble or to throw the ball by attacking the quarterback.  Once the quarterback gets a read to pull up and throw he must now decide where to throw the ball.

A slant versus a cover 2 corner with the LB vacating his zone presents a nice option because the QB has a giant window. This is a quick throw in front of the safety. If the corner runs with the slant in any type of man coverage, the bubble is uncovered.