Editor’s Note: Kevin Magouirk finished his fourth season as quarterbacks coach and second as Offensive Coordinator at South Carolina State.  Magourik coached one of the proflic passers in SC State history in quarterback Malcolm Long who would go on to break  13 single season & career school records, while earning All-MEAC honors twice in his career, including being named 2010 Pre-season MEAC Player of the Year. The former wide receiver and running back at the University of South Carolina began his coaching career in 2001 as a wide receiver coach at McLean High School before making the transition to the collegiate ranks with stops at St. Anselm College (2002), Lehigh University (2003-04) and The Citadel.

At South Carolina State our primary emphasis is running the football. We have a long, rich tradition of great running backs that have come through here. Naturally our pass game is devised of more down the field throws as defenses start to load the box and get closer to the line of scrimmage. One of our favorite routes to throw is the Post. We try to find this route vs. all coverage’s and when the timing is right, can be a huge momentum changer in our favor. There are a few ways we run and throw this route which is what I will share with you.

We will throw a variety of Post routes. Depending on the coverage we are facing we can manipulate defenders to spring our Post ball free. Depending on the type of Post ball, we will have to alter our Quarterbacks drop to match the protection and alter the Wide Receiver’s type of Post to match up with the Quarterback. I feel like the timing of it all is one of the most important factors if not the most important factor that goes into throwing the Post. As we game planned each week we would try to find a Post ball out of each of our formations to attack the defense. Whether you are a traditional Pro-Style offense or a Spread style offense, you can always find the Post. Ultimately we throw about 5 types of Post routes with the 5th really being a variation of the 4th.

You can also run a double move Post which we have stayed away from over the last few years due to personnel issues. If you can protect the QB long enough and have a great route runner this obviously can be a great asset to you arsenal. 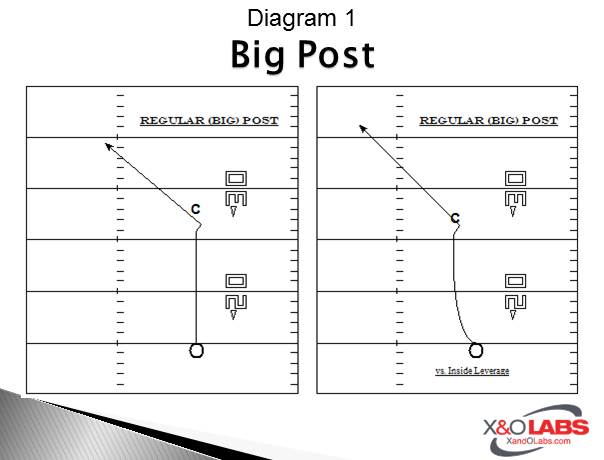