Should You Go For Two? 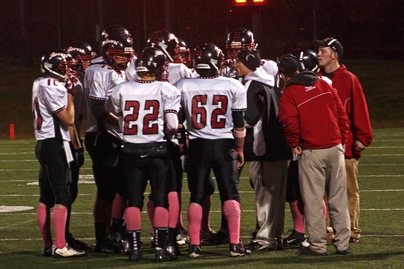 People often say that defense win championships.  While that may be hard to argue, in the case of our State Championship in 2011, the game was actually won by special teams.  Part of that equation for our team meant having a great 2 point play arsenal that we use after every score.  By making a commitment to the 2 point play, we were able to use some creative formations and play concepts to add additional stress to the defense.

Here is a look at some of the key factors that led to us going with our 2 point play strategy.

During the 2010 season we played a lot of teams that would line up in the swinging gate, and when you lined up in your defense and didn’t panic they would shift to their PAT team, and kick the extra point. During one of our offseason meetings we decided why not use the “Swinging Gate” all the time. All of our 2-point formations are named after aquatic animals and are yelled out as soon as we score.  We want to line up and get them ready to snap the ball as soon as the official blows the ready for play whistle. Here are our various swinging gate formations that we have used over the past few years.