Sure-Fire Rush Games From the 4-Down Front 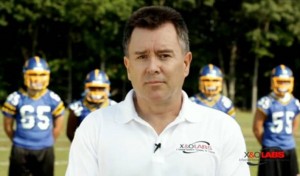 X&O Labs' researcher, Mickey Mays, is a 30-year coaching veteran having coached in NFL Europe, CFL, XFL, and at the D-I College and high school levels. Coach Mays is the lead researcher and author of the most prominent defensive line study ever conducted, "The Defensive Line Study" located at www.DefensiveLineStudy.com.

If all talent is equal, the most important factor in defending the pass is consistently hitting the quarterback.   Most coaches factor the numbers of sacks recorded during a season to be a major grade, but affecting the quarterback’s timing and accuracy in 2.5 seconds or less is also a key to shutting down a passing attack.

Overview: Most four-man pass rush games have a penetrator and a wrapper.  The penetrator (the first player in the game) stunts into a different gap than he’s aligned on the snap of the ball (if it’s a run he defends his new gap and the linebacker simply fits into the vacated gap).  The wrapper (the second player in the game) must flash his eyes on the snap and get his offensive lineman’s eyes on him.  If the play is a run, he doesn’t wrap and defends his original gap.   If it’s a pass (high hat) he wraps around the penetrator and exchanges pass rush lanes.  The primary goal of a pass rush game is to get a two on one match-up with a single offensive lineman.  It is important to note that throughout the course of a season, the penetrator will usually tally more sacks than the wrapper in pass rush games.

Though referred to by different names, these three pass rush games have stood the test of time and continue to be executed successfully each weekend of the fall. 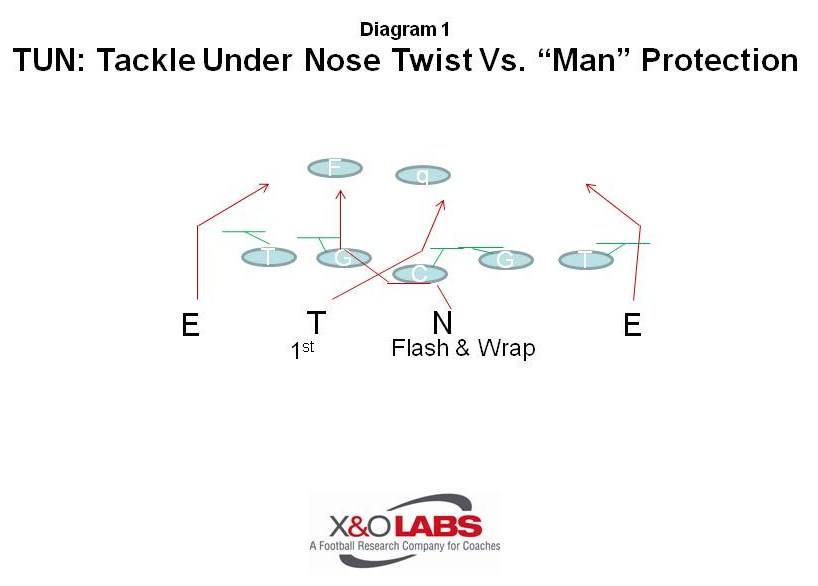 The 3-technique’s visual key is the back tip of the football.  On ball movement three things should happen: (1) he should take a big horizontal 45 degree step with inside foot (2) he needs to execute a rip move with the outside arm, and (3) he should lay the head on the lineman’s outside shoulder, this will delay the offensive guard’s spike recognition for a split second.

The eyes of the 3-technique are now on the center.  This means versus any run block, he plays the blocking scheme from the center to his guard.  Against a high hat read (pass) by the center, the 3-technique will attack and slam the outside hip of the center and ricochet up the field with his aiming point being the far number of the quarterback.

Nose Responsibility: The shade nose’s visual key is the football.  On ball movement, he will attack the center with two hands (in order to keep the center’s eyes on him) and wrap up the field around the opposite guard (into the B gap) just before the 3-technique collisions the center.   This gets the defensive linemen two on one with the offensive guard, forcing him to make a decision: either stay on the penetrator or switch off on the wrapping nose guard.  Either way it’s a lose/lose situation.