As most coaches know, we are the best thieves in the world. We tend to steal most ideas and then either rename, add, or change just a little bit to make the idea ours. The same is true with the "Miner" blitz that I am going to discuss here. The genesis of this concept came from an article I had read a number of years ago about a blitz/pressure that the then current defensive coordinator of the University of South Florida had written about. We took the general concept of the blitz/pressure and adapted it to our front, terminology, and concept.

The "Miner" blitz is a pressure that we will run in most passing situations, but have also run the pressure in run down situations we generally try to run this blitz when the pass/run ratio is roughly 65/35. The goal with this pressure is just that, to create pressure and force the ball out of the opposing quarterback before he wants to throw it. We really do not count on this a sack or casino style blitz which is to send all available defenders with zero deep coverage. Depending on the formation this could be 6,7,or 8 man pressure, essentially you are rolling the dice.

We are a 3-4 base team (Diagram 1) but will run the "Miner" blitz out of any of our odd or even fronts. We are not a field or boundary team as far as moving players. We will however flip safeties depending on our game plan, or our opponent’s personnel. In years past, we have switched our safeties if we have a safety that is a little bit better at defending the run (i.e more of a linebacker type) vs. our other safety that may be better in coverage against run heavy teams primarily to the tight end surface. But for the purpose of this blitz we may only switch if we have it game planned to do so, which creates a consistency with our defense that an offensive coordinator may look for. We really want to show everything the same whether we are blitzing or not. This blitz creates a tremendous amount of stress on the edge, and puts us in a real sound position to defend screen/draw. 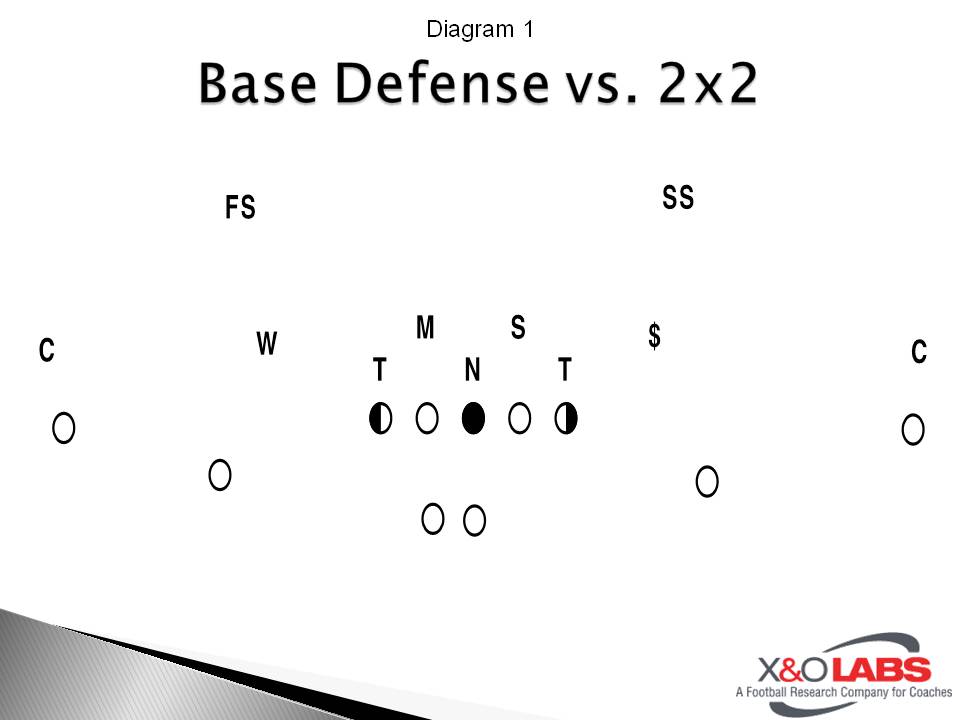 The "Miner" blitz is a 4-man pressure (diagram 2) we will also game plan to add the 5th rusher on a "hug" basis. We would either drop the Nose out to cover the backer hugging up to the back or we would have the Nose bull rush and have the Mike or the Sam check crosser first then "hug" up to the RB. This year we have seen a lot of occasions where the back would check the inside backer and then curl over the ball. We may have our Mike or Sam play it this way if we are getting a lot of perimeter routes without crossers and the back curls over the ball. As a base rule for this blitz we typically keep the Nose as the spy and have the Mike and Sam wall #2 or #3 depending on the formation. 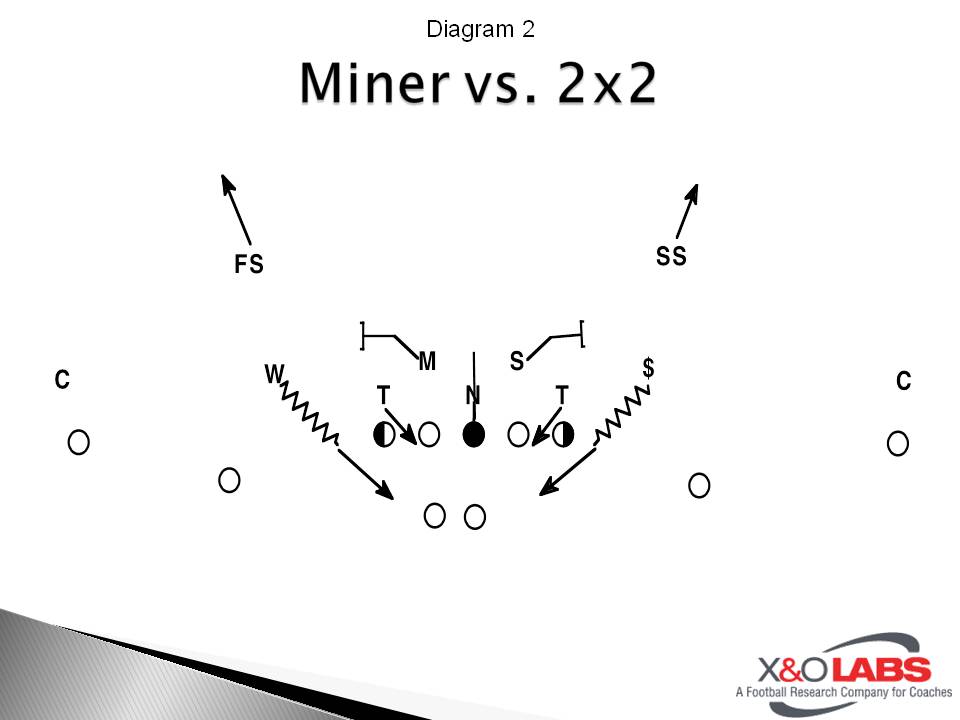 The coverage for this blitz is cover 2. The two ILB’s are to wall off #2 or #3. The NG is the short hole dropper and is responsible for screen/draw. His technique is one of two things:

1: He will execute a two step rush then drop to roughly LOS level looking for screen or draw.

2: He will drive up field to side of the back and then proceed to "hug up" to the back.

We do have certain rules where we can invert the coverage or will go to a Tampa 2. If we get an empty set we will either check out of the blitz or go to a Tampa 2 coverage where we will drop the Mike backer in the deep middle hole and the Sam backer will have the short middle towards the 3 receiver side and we will have the Nose work towards the 2 receiver surface while still spying the QB.

We believe in a couple of real movement or non-movement concepts within this blitz. The first concept is the movement concept in which we will stem the front, typically out of bear front (Diagram 3) to our odd front or from an even front to the odd front. 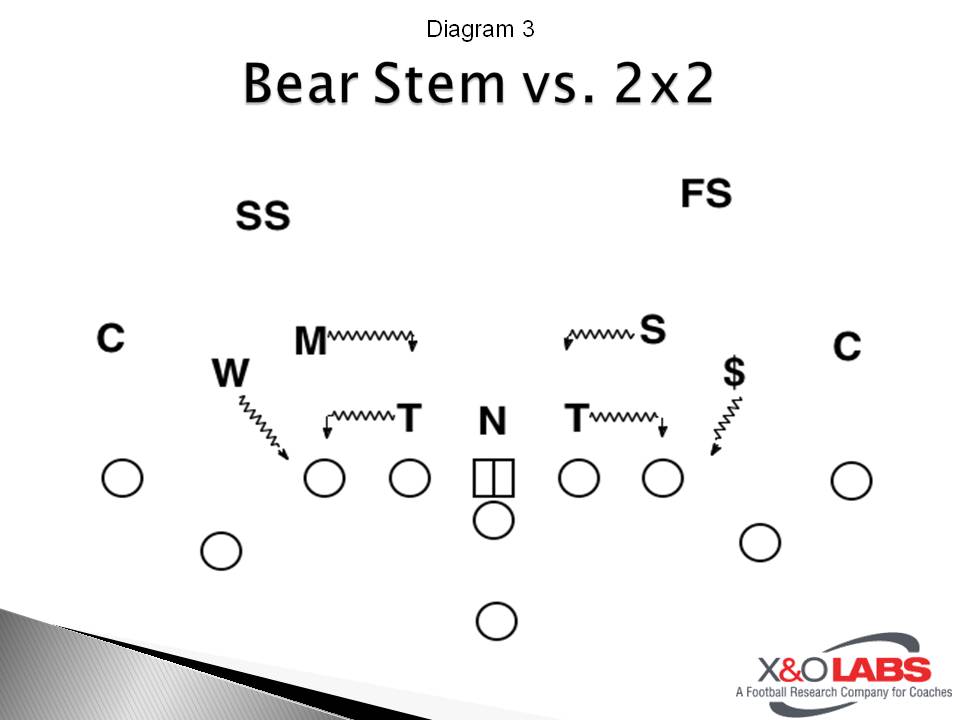 Along with that concept we will "Sugar" or show blitz with our two inside linebackers and also "Sugar" with both the outside backers (Diagram 4). We really do not set any rules on the OLB’s but let them know that they can be creative but not to sacrifice being caught out of their responsibility (which is to get pressure off the edge).

The other concept that we have is what we call the "walk" concept (Diagram 5) where we will walk the OLB out to the nearest receiver on a head up basis and on the snap of the ball they will then start their pressure, full speed at the heel line of the offensive line on a 2x2 basis. Versus 3x1 we will still walk but will designate whom we will walk to in pre-game plan (Diagram 6). We actually faced a receiver this year that was one of the better players in our league and was the opponents "X" receiver.  So anytime they went with a 3x1 set, we had it designated that either the Stud or the Will would walk out on him and show that we were actually going to go 2 on 1 with a high low type look (Diagram 7). Pre-snap, we would try to time it that the stud would start his blitz track and the corner would roll up. As a side note, we did actually play some high low coverage (or ¼, ¼, ½ with the ½ to his side) so that they would not be able to distinguish the difference until cadence. We really stress that we don’t want to sacrifice disguise of a blitz for the actual blitz. Some of the spread teams have gotten us on this (with the check to the sidelines) but we run this look and if they catch us showing the blitz we still run it. We do have bluff package so we try to work that also. This has actually been a real good change up with a lot of the spread no huddle teams when they see five in the box and they will check to a run play. We typically get the play to spill out to the blitzing OLB because we emphasize our Tackles wrong arm any sort of trap/puller action. 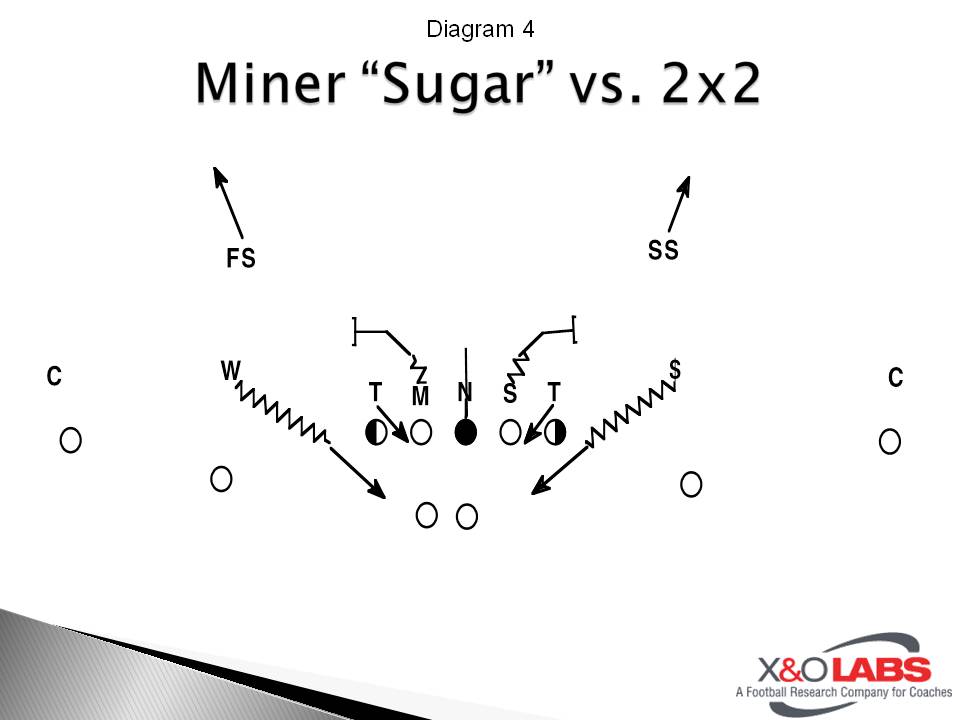