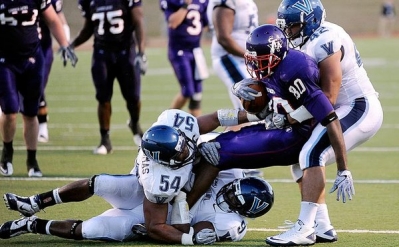 Most defensive coaches would agree that tackling is the one area we would all like to see our defense improve. It is one of the hardest skills to improve because of cutbacks in roster sizes, practice tempos, injury risk, etc. We do the best we can with tackling circuits, going high and hard or thudding up the back. While studying cut-ups one off-season, my staff saw too many missed tackles to count- especially in the open-field. The common mistake our players made was giving the ball carrier a "two-way go." Our players got head up on the ball carrier or didn’t use their help- we probably didn’t do a good enough job teaching them where their help was. They also broke-down on the way to the ball carrier, creating separation between the ball carrier and themselves, which made the ball carrier more effective. In the open field, the worst thing you can do is create a 1-on-1 matchup which feels like you are covering a punt with no help and that is what our players did when they broke-down. We over-pursued some runs and allowed a couple of reverses for big-plays. We believed the effort of our players was good in pursuit but we weren’t taking "smart" angles. We decided to try to structure our pursuit and define leverage for our players based on the defensive call. Special Teams coverage units are taught to keep the ball on the appropriate shoulder based on which side they are covering the kick from (left or right). We did a similar thing with our defense and the result was a conference championship the next season.

We have all done Pursuit Drill in different forms and fashions. We have had our players run to evenly spaced cones, tagged off on "rabbits", sprinted to the corner of the end zone, etc. By teaching our players defined angles in pursuit, our staff believed that we didn’t have to do a pursuit drill if we emphasized angles and effort during the course of practice or games. We would still do a pursuit drill in camp or as a reminder in-season as a toughness or conditioning drill occasionally. In place of pursuit drill, we would do a "Rubber Band" drill and a "V-Tackle Drill." We wanted to create a 2-on-1 tackling opportunity every chance we could. We had players we could count on as "Force Tacklers", so the rest of the players could be "Fill Tacklers." Force Tacklers finish on the outside hip/shoulder of the ball carrier and Fill Tacklers finish on the inside hip/shoulder of the ball carrier. Even if your help is not arriving at the ball carrier at the same time, you can count on him getting there. You could "shoot your rubber band" which means when you wrap a rubber band around your finger and shoot it at someone, it doesn’t deviate from it's aiming point. It goes as fast as it can to the point it is aimed at. It doesn't slow down. It goes in straight lines. The rubber band would force its target to avoid the rubber band in the opposite direction.

In our situation, if two of our players are aiming at the near (leverage side) hip of the target (ball carrier), we would create our v-tackle.at the appropriate hip of the ball carrier. If you shoot a rubber band, it goes straight to where you’re aiming and it doesn’t slow down until it hits the target. Our players no longer took pursuit angles where the ball carrier is going, like we have all heard growing up in the game, they took angles where he is right now. We could change our angle as the ball carrier’s hip moved further or closer to us but if we are close enough to have a shot at him, we want to take it. We don’t use language like "break down" or "come to balance because I don't like the term "break down" or "come to balance" because both terms encourage tacklers to stop their feet. When we slow down and stop our feet, we turn the ball carrier into a punt returner by creating space between us. A 1-on-1 tackle on a punt return is very tough. I like to have the space closed as quickly as possible. I like using the term "play under control" because it may slow them down a bit without stopping. If we go full speed through the outside leg or hip of the ball carrier, we should at least make him stop HIS feet, giving our teammates time to rally with their appropriate leverage, saving us yards.

If we don't make the ball carrier stop his feet, we won't slow him down enough, costing us yards. I see more instances of defenses breaking down and losing yards than I do of our guys flying in with proper leverage and missing to create a big offensive play. We want to "play under control" but full speed through our target. Even if we miss him, we believe that our players will at least force the ball carrier to stop his feet or we will slow him down enough for our help to get there if we attack him close to full speed. We don’t talk about "missed tackles." We will grade players down for "wrong tackles." If our defender pursues to make a tackle with improper leverage, that is a wrong tackle whether he makes the play or not.

Each defensive call below has defined "Force Tacklers", "Fill Tacklers", and "Touchdown Savers." The backside Corner and Defensive End are usually TD savers. The End should always check for reverse or extreme cutback before getting into his pursuit angle. The CB’s will enforce the "Rule of 21", keeping all 21 other players inside and in front of them save a TD. I have included a "Middle Open", "Middle Closed", Zone Blitz, and Pass Rush diagram explaining which players would be responsible for each role. This concept can be taught to any defense, regardless of style (3-4, 4-3, 3-3, 4-2 etc.). Gap control would depend on your scheme but taking defined angles shouldn’t be any different.