The growth of the basic Spread Offense using 2x2 and 3x1 formations and "no huddle" tempo to dictate defensive alignment has made it extremely tough to confuse offenses from a Base front.  Young QB’s and receivers are well trained to identify coverages and their weaknesses through numerous 7-on-7 opportunities and offensive linemen have the opportunity to block "less" people in the box.   Defenses have been forced to show their hand and are easily manipulated by a simple man count and plenty of time to change plays at the LOS.

The advancement in QB and recreational play at the high school level over the past 10 years has been nothing short of amazing.  Skill players in middle schools are now often proficient at recognizing and defeating basic coverages and by the time they graduate 5-6 years later, the entire offensive unit has that capability along with the ability to watch film anywhere and anytime through various online formats.

We believe an effective way to combat this consists of four critical parts:

First, we line up in a base 3-4 front with our NT in a 0-tech and our DT’s in 4-techs.  If the #2 is removed, our OLB’s line up in an "apex" position between #2 and the last man on the LOS at a depth of 3-yds.  If #2 aligns as a TE or H-back we will align in an 8-tech which is a "head up" alignment on the third man from the ball.  Our ILB’s align in a wide 30-tech (outside shade of the guards) and our secondary in a cover 4 shell (Fig. 1).  If we do show pressure, we like to show it with everyone so our players don’t get into a routine that is easily recognizable. 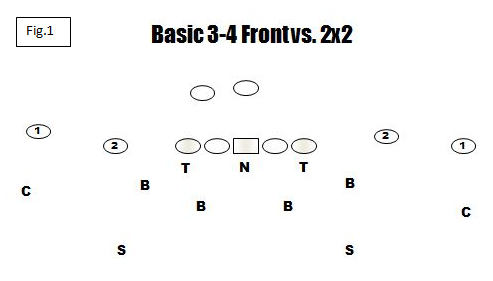 The basic 3-4 alignment allows us the ability to bring any of four LB’s in a multitude of ways and combinations.  That being said, it is very important that you teach your players not only their normal stances, but also the stances from which you would like them to pressure.  If you choose to overlook this, two things will happen:

We teach a pressures stance with an Inside foot forward (like starting a race from a 2 pt. stance).  We want our players to assume this position in a manner that they can "bounce out," rush, or play laterally based on the call or key.  We NEVER want our "pressure" players to get their inside foot closer than the heels of anyone in a 3-pt stance.  If they get to close, we find they are too easily blocked when blitzing or get "caught in the wash" when bouncing out.

Over the past two seasons we have been undersized as a team.  While we all complain about that, it is our duty as coaches to make sure we put our "undersized" kids in the best position to be as successful as physically possible.  Consequently, we have put our players on the move at the snap of the ball in as many directions as we can so that while the offenses can dictate where we line up, they cannot dictate where we end up and must take time to prepare for those scenarios.

Finally, in an attempt to become as unpredictable as possible our staff has attempted to make sure that our fronts and coverages are as sound as possible so that if everyone goes the "wrong" way, we can still be right which means all gaps will still be covered although it will be easier for the offense to outflank us.  This is where simplicity is so important.  Kids need to be able to run and make plays and when they do we all look like good coaches.  We have inserted four basic stunts that our call player can make in any 2x2 situation in any direction, all of which can be "locked out" by the defensive coach making the calls which means that we play the huddle call no matter what.  The result is a very flexible package that reduces field/boundary, backfield, and down/distance tendencies and increases excitement because a "teenager" is in control of our livelihood.