In the first article, (click here to view) I discussed how we align ourselves in Cover Two by body position to take away the holes in the field based on the receivers spacing.  In this article we will discuss the reads and techniques we use to accompany these body positions to execute the coverage in a successful way.  With all of our coverage variations, we teach our corners 3 ways to cover; Man Coverage, Cover 2(flat to deep), and Deep (Quarters).

When calling a coverage, the numbers tell the corner what to do.  Example: C-20, Strong Corner play C-2(flats) Weak Corner play C-0(man).

When playing Cover 2 in the middle of field the Corners look at the spacing of the #1 and #2 receivers and line themselves up in one of three body positions.  The corners will press, play choke technique, or play shake technique.

If the #1 receiver’s spacing is splitting the numbers and the hash (average spacing), then the corner will press the receiver with outside leverage. 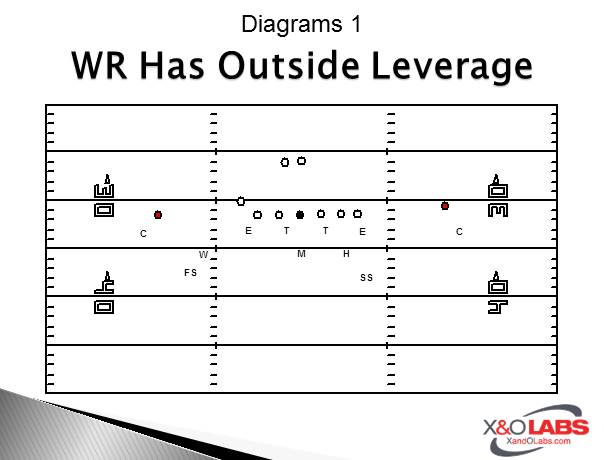 Teaching your corners to read through the 3-step is a must, especially as the high school passing game gets better each season. I’ll start by asking this question: Do you want your corner to be able to react to the QB’s release on the 3-step drop and be able to tackle the hitch as it’s caught or even break it up? I know your answer would be “yes.” You can’t take away everything, but if you could stop it in its tracks you would be happy, right? As you work your coverages according to your game plan you know you’ll complete a hitch or a slant but if you can tackle it or maybe take it away completely, that could change your opponent’s thought process! If you teach your corners to read through the 3-step drop you will be more confident to leave your best corner alone on the backside of trips. You will also be more confident in taking away the 3-step drop when you are not in a Two-deep or in press coverage.

1. Narrow base; feet under arm pits 2. Outside foot up; toe to instep stagger 3. Weight on balls of feet; soul of shoes have full contact w/ground 4. Bend in waist; pads over toes 5. Bend in knees; hands at knee level 6. Hips square to the line of scrimmage 7. Eyes focused on the QB

1. Controlled backpedal (3 read steps), while keeping the receiver in peripheral vision and reading the QB for an on or off the line of scrimmage read. 2. Upon the release indicators, snap head to receiver, transition (come out of back pedal) and close. 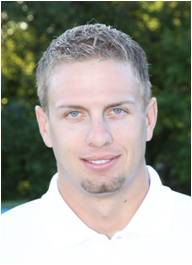 I want to first start by thanking X&O Labs for the opportunity to write about Press Technique. I also want to take a quick moment to thank the coaches I have worked with in the past and especially those in the Kansas City area for their experience and support. Lastly I want to thank all of the players that have played for me for their talent and effort throughout the years.

I have spent the past three seasons as the Secondary Coach at Harrisonville High School, which is located outside of Kansas City, MO. On defense we play an attacking 3-4. We blitz 90% of the time, so we are in man-to-man coverage 90% of the time, mostly with no safety help.  Our opponent completion percentage last season (2011) was 28.7% and in 2010 was 32.4%. When we blitz we feel playing man, instead of zone, allows us to dictate what the offense can and cannot do.

There are many benefits of press-man coverage. It disrupts the timing on the routes, and with us blitzing 90% of the time the ball will be out of the quarterback’s hands quickly. We like press-man coverage for three man reasons:

Alignment and stance must be addressed first. Everything in the following report will be discussed out of a Cover-0 look. When we are pressing, we will align with an inside shade (defender’s nose to receiver’s inside ear) (Figure 1). I like to use the nose-to-ear as a starting point because it allows my defenders to have a comfortable base with their feet. Some players are naturally wider and longer than others, and some guys are quicker and more explosive with a wider stance. We want to squeeze the line of scrimmage as much as possible, or get as close to being off-sides as we can if the wide receiver is ‘on’ the line. If he is ‘off’, we will align further away from the line of scrimmage and move inside more than usual. I want our defensive backs in a comfortable stance: knees slightly bent, butt behind, eyes up, arms loose (Figure 2). Putting the butt behind the defender allows more room to keep the receiver in front of the defender. It is going to take more steps and work for the wide out to get behind the defender.

This is where we will win or lose on the route. I like to teach playing press in two phases:

1st phase is usually won or lost on the line of scrimmage. Many coaches teach the slide step and off-hand jam. I prefer more of an attacking method with a punch/counter-punch (p/cp) into the off-hand jam technique. We are already aligned inside the receiver. I teach this to take the inside away and put the defender between the QB and receiver. When we punch/counter-punch (p/cp) our first step is forward with our inside foot. (See figure 3) . This step is not a big one, it’s more like a 6 inch step with the inside foot forward. Simultaneously we will “punch” our inside hand to the inside chest-plate of the receiver. This takes away the inside and forces the wide out to go one direction. The key to this is to not lunge; but stay balanced with a solid base or risk being out of phase within the first step. The second step will match the release of the receiver (outside or inside). The defender’s other hand will “counter-punch” to either the outside chest-plate (outside release) or shoulder (inside release) (Figures 4-5).

The following Statistical Analysis Report is from the Research Report: DB Press Technique. 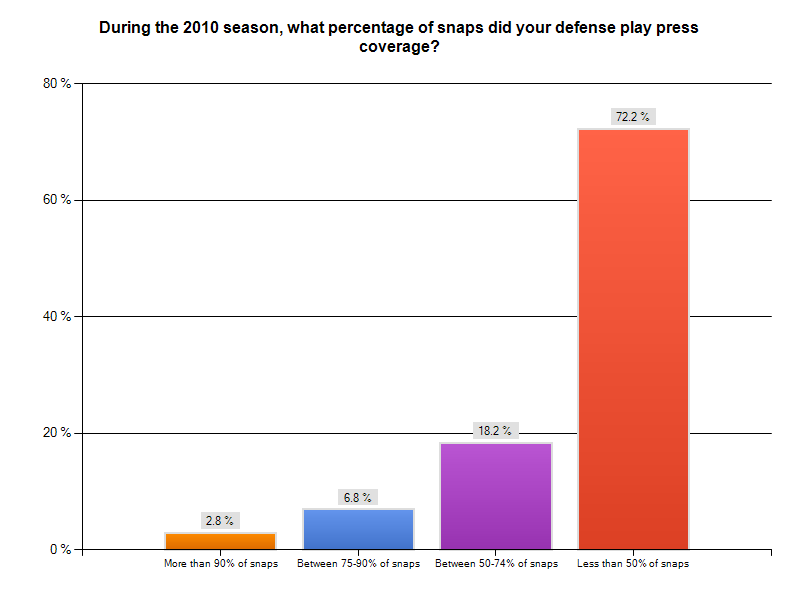 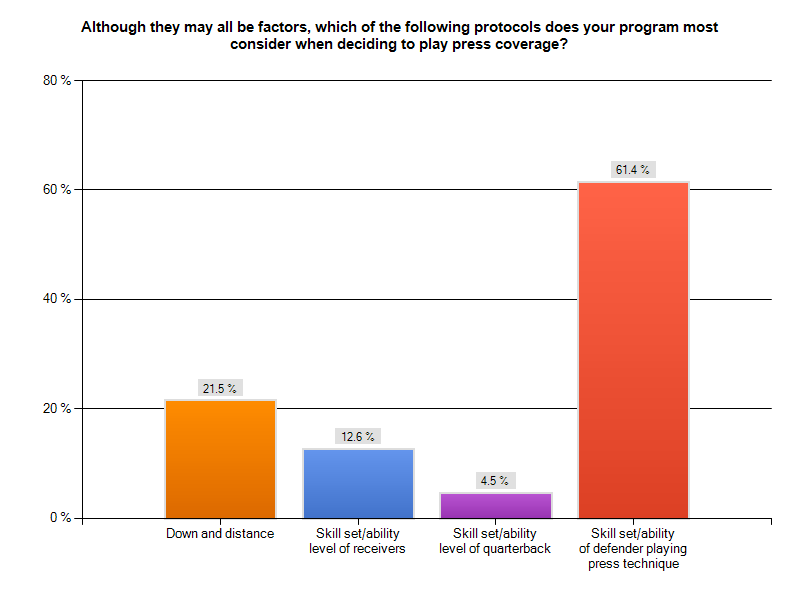 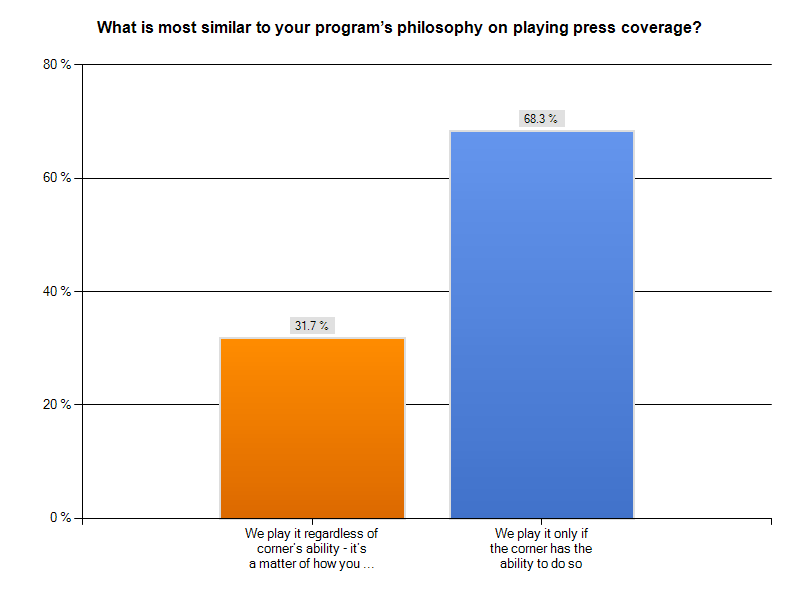